Ms. Yu's Stories of Truth Clarification on the Internet (Photos) 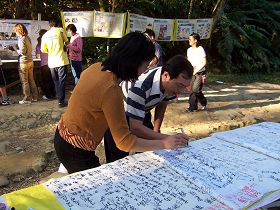 Ms. Yu talks to local residents about Falun Gong and collects signatures against the persecution on her days off. 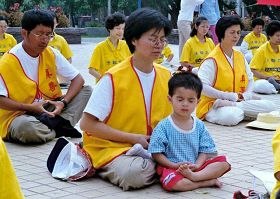 Ms. Yu and her young son practice the Falun Gong exercises together at an event.

In the year 2000, Ms. Yu's husband saw a TV program where a Falun Gong practitioner was telling her story about why she started practicing and about the mental and physical improvements it brought to her. After seeing it, he encouraged Ms. Yu to learn Falun Gong. Ms. Yu finished reading Zhuan Falun in one sitting. Afterwards, she told her sister in tears, "This is what I have been searching for." Her sister had been practicing Falun Gong for almost seven months by then.

2. Helping People Understand the Facts about Falun Gong on the Internet

Ms. Yu is involved in helping people understand the facts about Faun Gong on the Internet, where she often comes into contact with people from mainland China. She tells them about Falun Gong and exposes the lies coming from the state-run media in mainland China. She also helps those who would like to learn about Falun Gong to get that information. The following are some of the exchanges that Ms. Yu has had with people she met on the Internet.

Internet hacker: "I want to become a Falun Dafa practitioner"

Due to the lies and slander from the Chinese Communist Party (CCP), Ms. Yu is often misunderstood by those on the Internet. They sometimes scold her, and she has even been threatened by hackers. One time, a person told her, "I am searching for your location in Taiwan now. Someone paid me to attack your website, and I will not do it in secret. I am counting from one to ten and then your website will be down." The person asked to have a video chat session with her. At the time, Ms. Yu was very calm and she thought that it was a good opportunity to explain the facts about Falun Gong. So, she accepted the video chat and kindly told the hacker about the torture Falun Gong practitioners have been suffering in China and the violence done by the CCP. She also asked him not to stop others from visiting her website.

On the other side of the video, at first, the person tried to stop Ms. Yu from talking. After a bit, he started listening to her. Then he left and did not attack the website. A few days later, he sent a message to Ms. Yu saying, "I want to become a Falun Dafa practitioner." Ms. Yu was very moved. She realized that when someone has misunderstandings about Falun Gong, she needs to genuinely hope for a bright future for this person from the bottom of her heart and try to help the person understand the truth from his or her own perspective.

Ms. Yu also wrote some short essays about her understandings of life, including the truth about Falun Gong. These articles help people to get a feel for a cultivator's heart indirectly, and understand that Falun Gong is not anything like what the Chinese Communist media has portrayed.

Released prisoner: "I gave them a thumbs-up in my heart."

One time, Ms. Yu met a person on the Internet who had just been released from a prison, where he had been serving time for assault. When he learned that Ms. Yu was a Falun Gong practitioner, he was shocked and told her, "Those practitioners are really...." stopping in mid-sentence. Then he said in admiration, "I fought for a friend and was caught by the police. I was locked up with some practitioners. They had been arrested for doing their exercises in a park. They were really steadfast. They didn't fight back or talk back when hit or scolded, and they kept telling people that Falun Dafa is good and that the reports on TV are lies. I was really worried for them. I gave them a thumbs-up in my heart. They are really good people."

In the past few years, Ms. Yu has given Master Li's lectures and exercise teaching materials to many people. One college student sent a message to Ms. Yu after reading Zhuan Falun. He said, "I have quit smoking and drinking." Some people not only started practicing Falun Gong themselves, but some of their family members have become practitioners as well.

Ms. Yu has met many people on the Internet who became Falun Gong practitioners despite the CCP's persecution. That is because after they read the Falun Gong books, they realized that Falun Gong helps people to improve their moral character.

“Looking Inward and Forming a Harmonized, Indestructible One Body”

“Letting Go of Attachments and Steadfastly Walking the Path of Cultivation”