The Extraordinary Experiences of a Practitioner in Taiwan

Mr. Wang lives in Yilan, Taiwan, and has worked at TaiPower for the past thirty years. Before Wang practiced Falun Dafa, he practiced another qigong for twenty years, and he could feel some energy after a while. However, he was still often sick and didn't know much about the meaning of life. He became frustrated and eventually gave up.

One day in September 2000, Wang saw news about the persecution of Falun Gong on TV. He became curious and wanted to learn more about it. He bought books and video tapes in a bookstore and started to practice.

Witnessing Falun and Having Extraordinary Experiences

Mr. Wang said, "After reading a few phrases in Zhuan Falun, I started crying. Everything in the book was what I had been looking for. When I exercised, I could immediately feel strong energy. Within a few months, all my illnesses disappeared."

Six months later, Wang saw a Falun on the ceiling at his home. The colors and pattern were exactly like the one in Zhuan Falun.

He knew that one of the dentists in his neighborhood practiced Falun Dafa as well. Through Dr. Li, he started to exercise with a group of practitioners, joined a Fa study group, and joined activities to spread Falun Dafa and expose the persecution in China.

Seeing Wang become so healthy, his wife and two brothers joined the practice. Wang bought many copies of Zhuan Falun and gave them to people who were interested in the practice. Wang's wife began participating in truth-clarification activities in 2008.

In April 2007, Wang and his wife went to a Falun Dafa experience sharing conference in New York. It was their first time seeing Mr. Li Hongzhi, the founder of Falun Dafa. They were happy, and they encouraged each other to progress more diligently in the practice.

In June 2008, Wang had a serious car accident and was taken to an emergency room. The x-ray image showed a bone fracture on his left leg and the doctor told him that he must stay in the hospital. Wang refused and went home. He consistently studied the Fa and did the exercises. Three weeks later he was able to go back to work. He recovered quickly and was able to cross his legs while doing the sitting meditation.

Gong Columns that Extend into the Sky

On May 9, 2009, six thousand practitioners in Taiwan formed a enormous image of the book Zhuan Falun in southern Taiwan. They wanted to celebrate the Tenth World Falun Dafa Day and the seventeenth anniversary of Falun Dafa first being taught in 1992. That day Wang videotaped the activity. On the video from his camcorder, every practitioner appeared to have a column of light on his/her head, and the columns went into the sky. The light columns moved with the practitioners. 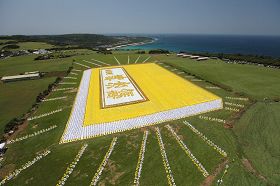 On May 9, 2009, six thousand practitioners in Taiwan formed a enormous image of the book Zhuan Falun in southern Taiwan

Before the practitioners started forming the book, Wang took out his camcorder and videotaped the scene for about 15 seconds, and then joined the activity. On his way home, he took out his camcorder to view the clip and saw light columns on the head of every practitioner. They believed them to be the gong columns described in the book Zhuan Falun. 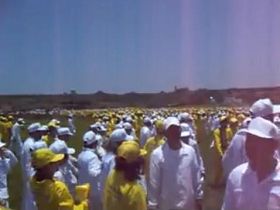 Wang said the weather that day was very good and five seconds into the recording, every practitioner who walked into the camcorder had an apparent gong column above their head. The columns followed practitioners everywhere they went.

Encouragement for His Practice

"What does the master give you? He gives you the gong mechanism that develops your gong. Since de exists outside one's body, one's real gong is generated from de. Both the height of one's level and the strength of one's gong potency are generated from de. The master transforms your de into gong that grows upward in a spiral form. The gong that truly determines one's level grows outside one's body, and it grows in a spiral form, eventually forming a gong column after it grows above one's head. With just one glance at the height of this person's gong column, one can discern the level of his gong. This is one's level and Fruit Status as mentioned in Buddhism. While sitting in meditation, some people's Primordial Spirit can leave their bodies and reach a certain level. Even if it tries, his Primordial Spirit cannot ascend any further, and it does not dare to move up. Since it moves up by sitting on his gong column, it can only reach that level. Because his gong column is just that high, it cannot move up any further. This is the issue of Fruit Status mentioned in Buddhism."

After seeing these light columns, Wang was so excited and moved. He said, "Ordinary people might find it interesting. Being a practitioner, I know what these columns mean. The columns remind every practitioner to be more diligent in the practice and tell more people about the beauty of Falun Dafa."