(Clearwisdom.net) On the evening of June 28, 2009, Shen Yun Performing Arts continued with their second performance at the Auditorio Belgrano theater in Buenos Aires, the capital of Argentina. Although it was Argentina's federal election day, many Eastern and Western audience members still came to enjoy the show, and were astounded by the profound essence of traditional Chinese culture, as well as the exquisite dance and music. 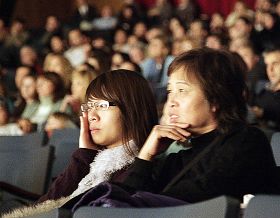 The audience was full of excitement, as cheers and applause continued throughout the course of the show. Tenor Tian Ge performed an encore upon calls from the audience.

Mr. and Mrs. Liu from Fujian Province, China, own a business in Buenos Aires. They attended Shen Yun's performance with their close friends, Mr. and Mrs. Wong. After the show, everyone in the group said the show was very beautiful and that they liked it very much.

Mr. Liu commented right away that the show was excellent and presented authentic Chinese culture. He said, "Very authentic, it is very authentic."

Mrs. Liu smiled cheerfully, and said her wish had come true as she had wanted to see the show when it was advertised in the media. She particularly praised the beauty of the dancers.

Mr. Wong said, "This show is very beautiful. It is very creative, artistic, and every piece was very good to watch."

Chinese businessman: The programs were fantastic 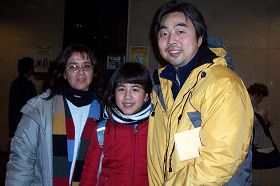 Chinese businessman Mr. Sun Yonghong attended the show with his wife and daughter

Mr. Sun Yonghong, runs a business in Argentina. He brought his wife and daughter to the show, and said the program was "fantastic." He added,"The show was very good, the music and dance were all great. In particular the costumes were bright and beautiful, and we could see the performers were all performing with their hearts." His favorite was the solo erhu (Chinese violin) music piece. 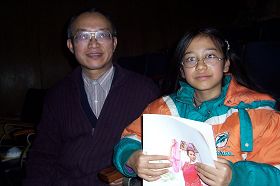 Mr. Chen Mingzhong owns an electrical appliance store in Argentina. He came to see the show with his daughter. Mr. Chen was impressed by the show and its visual effects. Both he and his daughter loved the "Forsynthia in the Spring" and "Drummers of the Tang Court" pieces. His daughter Chen Yueli said she liked the drumming performance for its outstanding rhythm, while Mr. Chen also liked the "Mongolian Chopsticks." 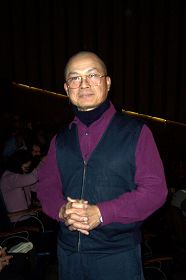 Chinese language teacher Mr. Xu Nanqiang thought the show was very well organized with a lot of rich content, and beautiful costumes. He said Shen Yun allows the people of Argentina to understand traditional Chinese culture, such as their virtues of loyalty, filial piety, humanity, and righteousness.

After watching the show, Ms. Zeng Meili, a teacher from Taiwan said that the show tied together the beauty in both art and culture, and presented it in a wondrous way. From the show, she could see the essence of Chinese culture, "[The show] displayed the flourishing prosperity at the peak of the Great Tang Dynasty, as well as the profoundness of the Buddha School."

Mr. Lin, a local doctor of Chinese medicine saw the show with more than a dozen friends and relatives, seated in the center of the theater. During the most exciting scenes, Mr. Lin and his friends applauded and cheered enthusiastically. When the show came to an end, they continued to wave to performers on the stage before the curtain fell. "The show was fantastic! Most important is its way of uplifting moral character. Ordinary artistic performances, such as those rock concerts much liked by young people today, can pollute human character, and cause morality to sink. Yet this program [Shen Yun] is very different, I can feel that the show can uplift one's moral character, and elevate the soul."

He said, "This is the first time I have seen such a high level performance outside of China. A quality show like Shen Yun has programs that reflect the true substance of Chinese culture." Mr. Lin also said once he returned home, he would call his friends and encourage them to see Shen Yun.

His friend Mr. Guo added, "The show was very colorful, and the performers really focused their hearts. It is very touching to be able to see such a splendid performance outside of China."

"Tonight's show makes us feel proud to be Chinese" 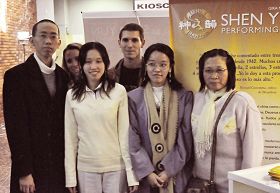 Restaurant manager Mr. Lin came to the show with his wife and four friends.

Restaurant manager Mr. Lin saw the show with his wife and four of their friends on the night of June 28. He felt the choreography of the performance was incredible, "I like the 'Mongolian Chopsticks' in particular, I think it is quite special. I would never have imagined items used in our daily lives, such as chopsticks, being used as props in a dance performance."

Mrs. Lin felt the show was, "Very moving to the heart." She also said, "Through the dances, I feel that Chinese culture is so great and profound! Tonight's show makes us feel proud to be Chinese. As Chinese people, compared with the Western audience, I feel we can understand more of the dances on its spiritual level."

According to statistics, there are approximately 60, 000 Chinese people in Argentina, and most reside in Buenos Aires, where many run supermarket and restaurant businesses.