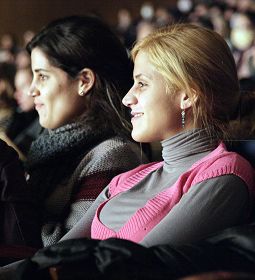 Professional Violinist: the show is unbelievably beautiful and exceptional

Nicolás Tabush, a violinist with the Columbus Theater (Teatro Colón) in Buenos Aires attended the Shen Yun performance and commented that the show was unbelievably beautiful and exceptional.

Mr. Tabush was surprised at the Shen Yun dance artists' amazing performance, "The dancers moved like they were all one body. The coordination of the movements is unbelievable, to where it appears supernatural, and I don't know how they are able to accomplish this unity, it's marvelous."

As for the dancers, Mr. Tabush said they were "exceptional, all possessing a lot of energy, vitality and life."

Mr. Tabush said that the show made him feel as if he had personally experienced China's history and culture. He said, "I feel as if transported to China with its stamp of different regions and respective cultures represented, and if not for this show I would have never seen them."

Being a violinist, he liked the erhu performance very much, finding it "expressive and fantastic." He expounded that in spite of its having only two strings, it is able to achieve an astonishing amount of expressiveness. He was moved by its purity.

Mr. Tabush commented that the music of the entire production was amazing, marvelous. The music, the arrangement of costumes, and the stage design were unbelievably beautiful.

Having traveled all over the world, including China, he said he had never seen anything that compares to Shen Yun. He said Shen Yun provides the only opportunity to have a direct exposure to Chinese culture through appreciating dance.

Mr. Tabush was fascinated by the background graphics saying, "The interaction of the background screen with the performers is just fantastic. I couldn't figure out how they did it."

Narrator of Local Government: the Show is Perfect and Extraordinary

Raul, a teacher of voice techniques and a narrator for the city government, and his wife Nora, a psychologist, were in the audience. They felt fortunate to attend the show.

Raul said in an interview during the intermission that he could see that the grand show featured admirably strict design and management. The performers showcased a very different and beautiful culture through dancing.

"I especially like the dance--one can discern a language through the hand movements and the accuracy of the different figures we saw on stage. It is very eye-catching, the arms and hands, and the involvement of the costumes. The costumes were not only decorative, but they also participated in the language of the dance ... the fans, the costumes, everything. Every element took part in the presentation of the dances. It was very eye-catching and very interesting. The last program, with the drums, had an admirable rhythmical accuracy, and marvelous coordination. One could see the signs of rigorous training and discipline," said Raul.

Nora also enjoyed the show very much. "We like to appreciate and enjoy everything related to other groups of people. I'm happy I could come and appreciate this kind of expression," she said.

Laura Gatto, vice-director of the school of dance at a local university, was interviewed during the intermission. She described the show as "Splendid," and it's "a very interesting technical display, and fabulous costume designs, a happiness of movement that becomes contagious."

"Let's say that right now I am still with my mouth open, because I think of the amount of time, practice, and preparation to produce this, and to transport this and bring it all the way here. The effort is enormous and oh so valuable, very, very valuable," she added.

Ms. Gatto said, "The beauty that it brings us takes us to a world that is being rescued. It is a world that Westerners do not know profoundly, and what they bring is a present for the eyes, a delight, because it is also telling us--giving us--a profound cultural inheritance."

Ms. Gatto said that the show not only gave her visual enjoyment, but also expressed deep inner meaning.

Valeria, a tango dancer, was impressed with the dance in Shen Yun. "I like the combination of colors; the choreography and movements are striking," she said.

Valeria said the dancers' poise and movements are different from what she is used to seeing and the technique is completely different. "I'm surprised with the movements, [they] are so fluent, so harmonious," she said. "There's nothing abrupt in the choreography, it's very flowing. It's very good."

Valeria noted how the dancers seemed to be enjoying themselves throughout the performance. "That's something rare to see," she said. "As dancers, we can have technique, and we forget to enjoy."

"It's really great to be able to see another dance, another culture; it's very interesting."

Valeria also admired the communication between the dancers themselves as well as their communication with the audience. "That touched me," she said. "They're harmonious."

“Mr. Guo Xingguo Dies One Month after Being Released from Prison in Heilongjiang Province (Photo)”