Mr. Guo Xingguo Dies One Month after Being Released from Prison in Heilongjiang Province (Photo)

(Clearwisdom.net) Mr. Guo Xingguo, around 40 years old, lived in the Fifth Group, Second Community, Xing'an District, Hegang City, Heilongjiang Province. After he began cultivating Falun Dafa in 1996, his pleurisy disappeared, and he quit smoking and drinking. He worked very hard, had a very high moral standard, and was a good person according to Truthfulness-Compassion-Forbearance. He had a nice family. 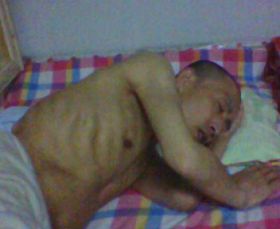 Mr. Guo Xingguo could not take care of himself after being released

Mr. Guo Xingguo continued cultivating Falun Gong after the persecution began on July 20, 1999, and he was constantly mistreated. He was detained for more than one year and released after his family was fined. He had to live away from home to avoid being arrested for many years, and he never got to spend a Chinese New Year Holiday with his family in ten years. He went to Beijing in 2000 to speak out for Falun Dafa, and he was arrested in Tianjin City. He was detained two months and went on hunger strike for 18 days after being taken back by the local police. The police saw that he was dying, extorted 500 yuan from him family, then released him.

At the end of 2000, he wrote to the Xinjian Police Station to clarify the truth, and he was subsequently arrested, brutally beaten, and imprisoned in the Hegang City Second Detention Center. He was coughing blood due to being brutally mistreated and went on hunger strike for 18 days again to protest the persecution. The doctors diagnosed him with tuberculosis, and he was as thin as a skeleton. His father was extorted one thousand yuan before he was released. He recovered rather quickly due to studying the Fa and doing the exercises.

In 2002, Mr. Guo was arrested again on his way to Beijing to appeal. His tuberculosis recurred after he was tortured. He was locked in patient inmate cell and not allowed to be visited. His mother, also a practitioner, was forced to live in exile to avoid being arrested, and his old father was left home alone.

In September 2002, the Gongnong District Court sentenced Mr. Guo to 15 years in prison, and his mother was sentenced to three years of forced labor in October 2002. Guards in the Hegang First Detention Center took him to the Harbin City Prison while he was severely ill.

In February 2003, the Harbin City Prison notified his family to pick him up. The administration of Hegang City First Detention Center brought a doctor and his family to pick him up, for he was dying. He was taken directly to the Tuberculosis Hospital. Doctor diagnosed that both his lungs had rotted, and he suffered from hyperplastic anemia. He solidly studied the Fa and did the exercises in the hospital, and he miraculously regained his health, but then the police detained him in the Hegang City First Detention Center again.

On October 30, 2004, the police took him back to the Harbin City Prison, but he was rejected. He continued to be detained in the Hegang City First Detention Center, and they soon had him imprisoned in the Hulan (District) Prison.

By the end of 2008, Mr. Guo's life was in danger again. The Hulan Prison administration wanted to release him, but local police refused to sign and "accept" to let him leave for medical treatment. He had to stay in the prison.

On March 9, 2009, his family visited him and found that he was walking with his body skewed and had no energy to talk. They tried to find the prison director Tian Yueqiang or the vice director Xiao Jiquan to request his release, but the clerk Chen Weiqiang stopped them, saying that they had reported his case to the upper levels, and the family had to wait several days.

In April 2009, the Hulan Prison told his family he only had one month to live, and the family could undergo the process for medical release. However, the Xing'an District 610 Office Chair Kong Liyan still refused to approve them. Mr. Guo's family had to use their money to get his paperwork done. On May 7, 2009, the prison administration took doctors with them to take him home and forced his family to pay 1200 yuan for travel costs.

Upon returning home, local 610 officers and police threatened Mr. Guo's father to report all people that visited him and not allow any Falun Gong practitioners to contact him. On the morning of June 2, 2009, Mr. Guo suddenly had a fever, drank four cups of water, and suffered from a cold sweat. He felt that he could not live any longer. His family took him to the hospital, and he died on the evening of June 3, 2009, less than one month after being released from prison. Two officers soon arrived at his home to request that his body be quickly cremated.