Interviews with Participants of the Grand Parade in New York (Photos)

On June 6th, 2009, approximately 6,000 practitioners of Falun Gong (also known as Falun Dafa) took part in a parade with the theme "Call to conscience, stop the persecution," held in Manhattan, New York. Who are these people? Why have they chosen to practice Falun Gong, and why did they take part in this great parade? What did they want to tell people? 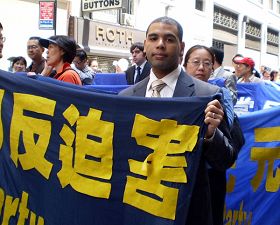 Quentin said, "The persecution must stop."

Quentin Bellow is a Falun Gong practitioner residing in New York. He told the reporter that the practice helped to improve his health remarkably. Quentin said, "Practicing Falun Gong gave me more comfort in life," and that Truthfulness-Compassion-Forbearance are great cultivation principles that everyone should know of. "Today I have come to join the parade in hopes that more people will understand the persecution that is happening in China. This calamity has taken place for ten years, it must be stopped!" 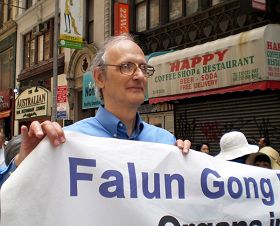 Loren from Iowa, "It is shameful that the persecution continues today."

Loren McCune from the US state of Iowa has practiced Falun Dafa for two and a half years. A friend told him about the brutal persecution of Falun Gong in China, which caught his attention. "I had been continuously searching, and had studied Eastern philosophy and Taichi for many years. I discovered that Falun Dafa is a teaching of a very high level, and I very much like Truthfulness- Compassion-Forbearance. Practicing Falun Gong gives me physical health, and I'm filled with energy." Loren also said, "The persecution that is taking place in China is very vicious, and it is shameful that it continues today. The world should be more attentive on this issue." 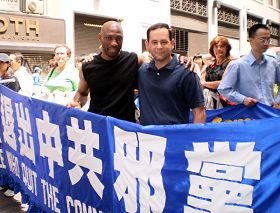 Warren (left) and David (right) are new practitioners of Falun Gong from the state of Virginia.

Warren Woodson and David Jaroneski are new practitioners of Falun Gong from Richmond, Virginia. Warren has been practicing for two and a half years, while David began to practice eleven months ago. When speaking of the physical and spiritual changes that Falun Gong has brought to him, David said, "It is difficult to express with a few words. I cannot even remember what I was like eleven months ago. Back then, I had many conflicts with different people, but now I have let a lot of it go. The changes are hard to explain in words. After practicing, my health also greatly improved. In the past, I had back pain and side pain, now it's all cured." Warren and David were both very happy to join the parade in New York. Warren said, "To be together with so many practitioners of Falun Dafa, so much righteous and positive energy, and such power of the uplifting spirit, it is truly great." Regarding the persecution in China, Warren said, "The persecution is so terrible. Because of the Chinese Communist regime's external appearance of financial power, many people have turned a blind eye to the persecution that is happening there, because they want to make money. But no matter what, the Chinese Communist Party's persecution of people based on their belief is absolutely wrong. Falun Gong practitioners are not involved with politics, but are exposing the Communist regime's brutal crimes, and standing up against the persecution." 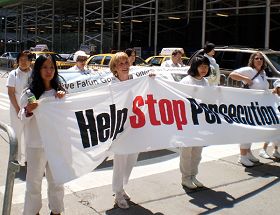 Kathy from Ottawa (second left, front) says tragedies should not be repeated.

Kathy Gillis from Ottawa, Canada, has practiced Falun Gong for eleven years. She said, "Practicing Falun Dafa not only gave me physical health, but my life became full of meaning. In the past, I always felt I should have achievements, but did not know what to do. After practicing Falun Dafa, I found it." Kathy held a banner which called on the Chinese Communist Party (CCP) to end the persecution of Falun Gong. She said, "In World War II, the holocaust that took place in the concentration camps was mind chilling. At that time I was a child. I was shocked that people did not do more to put a stop to those tragedies, and I was shocked that the adults did not tell me what had happened. I vowed never to let those events repeat." Amongst the parading crowd, Kathy called for people's attention to the persecution, to bring an immediate end to the CCP's brutal crimes. 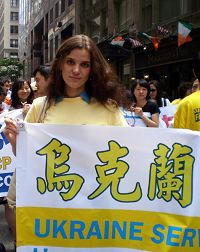 Tatina from Ukraine was very glad to be with so many practitioners of Falun Gong from around the world.

Tatina Skulkinia from Ukraine has practiced Falun Gong since 2001. She said, "Since cultivating I have become more peaceful and compassionate. In the past I had a very bad temper. Before I practiced I drank a lot of alcohol quite often, you know many young people in Russia are like that. After learning Falun Gong, I no longer liked to drink, and the illnesses in my body disappeared. My husband also practices Falun Gong, and it has helped improve our family life greatly, because by following Truthfulness-Compassion-Forbearance, we know how to resolve conflicts." When asked why she took part in the parade, Tatina said, "I know Falun Dafa is great, it has brought all kinds of benefits to people. I am very honored to be able to join this parade, to be with so many practitioners from all over the world. This is so wonderful, I cannot describe with words how great it is." 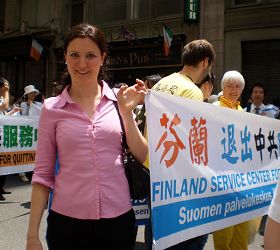 Anna from Finland, "After practicing, everything in my life improved."

Anna Kokkomen is from Finland. Three years ago, her partner (now her husband) saw a lady practicing Falun Gong exercises. His curiosity brought him to ask the lady what practice it was. After he returned home, he told Anna what he saw. Even though she did not know much about the practice at that time, Anna immediately said she would also like to practice those exercises. Since then, she has walked on the path of cultivation in Falun Gong. She said, "I love Falun Gong. After practicing, everything in my life improved. My spirit and physical health all became great." 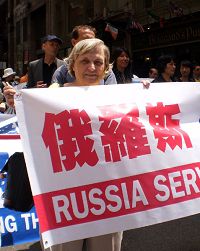 Zoya, a 70-year-old woman from Moscow, has practiced Falun Gong for seven years. She said she had been searching all her life, and when she came across Falun Dafa, she knew that was what she was looking for. She said, after practicing, "My family was more harmonious, and the relationship between myself and my daughter-in-law improved." Even though she was 70, Zoya was still working. She had once considered retiring to spend more time spreading the facts and truth of Falun Gong; however, her supervisor asked her to stay on the job, even if she worked half days. Because Zoya was a practitioner of Falun Gong and worked responsibly with compassion, her supervisor and colleagues all liked her very much and did not want her to leave. Every day, Zoya brought banners to the front of the Chinese Consulate in Moscow to protest the CCP's persecution. In the beginning, her colleagues made jokes about her, but upon learning the facts and truth, they all supported her righteous actions very much. On the topic of this great parade in New York, Zoya said, "The persecution has taken place for ten years. I want to be with fellow practitioners of Falun Gong, and together condemn the CCP's persecution and brutal crimes." 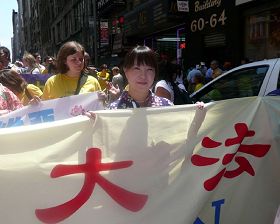 Yuetian Jingzi from Japan said, "We cannot let the CCP continue to persecute these benevolent practitioners of Falun Gong."

Yuetian Jingzi, who has traveled here from Japan, began to practice Falun Gong 12 years ago. Even though she lived in Japan, in an environment of comfort, whenever there have been large scale activities in other parts of the world calling for an end to the persecution of Falun Gong, she would participate with her own finances, when circumstances allowed. She said this was because, "We cannot let the CCP continue to persecute these benevolent practitioners of Falun Gong." 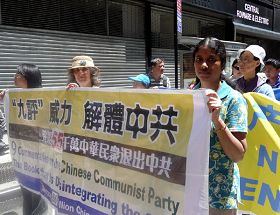 Residing in the city of St Louis, Vasudha Samathula is an Indian practitioner. She began to practice in 2001 when her colleague introduced her to Falun Dafa. Vasudha felt this colleague was a very compassionate person, so upon learning of the profoundness of Falun Dafa, she began to practice. She said, "Before practicing, I had a very bad temper that was easily set off; but after practicing Falun Dafa, I became even-tempered." 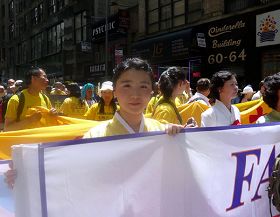 17-year-old Zhao Yingyi from Korea said, "Having practiced for so long, I know the beauty of Falun Dafa."

Zhao Yingyi from Korea turns 17 this year. She began to practice Falun Dafa with her mother at the age of seven. She said, "Having practiced for so long, I know the beauty of Falun Dafa. I gained good health, good academic results, and have good relationships with my classmates, all the kids like me." When asked why she came to the parade, she said, "I feel this activity is very important. So many Falun Dafa practitioners have come here from all around the world, so I thought this was a great opportunity for us to strive forward diligently together."