On June 6-7, 2009, more than 6000 Falun Dafa practitioners from all over the world gathered in New York City for a series of events, including large scale group practice in parks, a public rally in front of the United Nations, a grand parade in Midtown Manhattan, and an experience sharing conference. The practitioners told people about the beauty of Falun Dafa, and called on the international community to help stop the CCP's ten-year-long persecution of Falun Gong. On this occasion, New York State Senator Eric L. Adams issued the following proclamation in recognition of Falun Gong as a movement of peace and the month of June as Falun Dafa Month.

In Observance of Falun Dafa Month

, A Great State is only as great as its tolerance for well-being to those who practice it, which, in turn, promotes good citizenship and makes said state a better place to live; and

, Falun Gong is a traditional Chinese spiritual discipline that includes exercise and meditation, with principles based on truth, compassion and tolerance; and

, since its introduction in China in 1992 by its founder, Li Hongzhi, Falun Gong has been practiced by over 100 million people in 80 countries; and

, Falun Gong was taught in New York State in 1996 and is now offered, free of charge, to New Yorkers of all nationalities, races and ages at 25 practice sites across the state; and

, Li Hongzhi, or "Master Li," has lectured on Falun Gong worldwide, has received more than 600 awards, and has been thrice nominated for the Nobel Peace Prize; and

, despite persecution by the Chinese government, Falun Gong's supporters in China continue to defy the government and practice their discipline, while using non-violent means to petition for redress and to call international attention to their struggle; and

, the month of June has been recognized as Falun Dafa Month; now, therefore, be it

, that I, State Senator Eric L. Adams, recognize Falun Gong as a movement of peace; and be it further

, that a copy of this proclamation be transmitted to Clearine Hunter, on behalf of New York State's Falun Gong community.

In Witness Whereof, I Have Hereunto Set My Hand and Signature 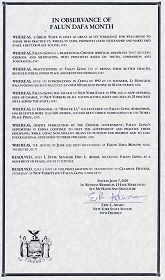 “Interviews with Participants of the Grand Parade in New York (Photos)”