On the evening of June 27, 2009, at the Auditorio Belgrano of Buenos Aires, the Shen Yun Performing Arts Touring Company presented its first show in South America. The traditional Chinese culture of pure compassion and beauty portrayed by gorgeous costumes, magnificent scenes of the heavens, and talented choreography enchanted Argentineans. 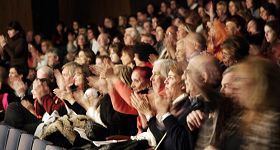 Shen Yun audience at the Auditorio Belgrano of Buenos Aires

Diana practiced ethnic dance for over twenty years before immigrating to Argentina ten years ago. Though she has been unable to practice her beloved profession here, thoughts of dancing are forever with her, and she has been tracking the acclaimed Shen Yun Performing Arts world tour closely. She was fascinated by the New York-based company and its sensational success around the world. She was so happy to have her wish fulfilled as she at last saw the show in person.

During the intermission, she commented with regret, "My seat, in the eighth row, is a bit too far from the stage. I wanted to buy one of the best seats, but they were sold out. It is so surprising to see that Shen Yun is so hot in a South American country."

Diana was captivated by everything, including the costumes, the colors, the choreography, etc. She was in particular impressed by the choreography. "Shen Yun has done a great thing as it brings Chinese classic dance to the world."

Senior Journalist: I Will Watch It Again

After seeing the show, senior journalist Jose Carlos's comment was, "Spectacular, absolutely spectacular!" The choreography was excellent, and the music was very beautiful. The thing which impressed me most was that there was not a single mistake during the show, which involved the coordination of so many dancers!"

Jose said that the show portrayed many layers with a clear message. "I will come back to watch it again because good things should be watched again and again."

"I knew a little about Classical Chinese dance, and many years ago I saw a show presented by a dancing group from Taiwan. In addition, I have met some Chinese friends. I think that the show is something not to be missed. It inspires me and is very uplifting."

Jose has been working in newspaper industry for several decades and his wife Elizabeth is a publisher of several journals. Their free newspapers print a total of 300,000 copies per week.

Elizabeth commented that the show was very beautiful and of high level. "The young performers' dancing conveyed a very inspiring message which melts the heart of every audience member."

"It was very touching! Very touching!" Mr. Zhou is the owner of a Chinese grocery supermarket in Buenos Aires. He left China in 1993 and came to Argentina in 1998. When he first heard about Shen Yun Performing Arts World Tour two years ago, he was very jealous of people who could see the show in person. So as soon as he heard about the company coming to Argentina, he bought tickets for the first show for his son and himself. "Next Monday, my wife will come as I will take care of our son at home."

The dancing numbers which touched him the most were, "Heaven Awaits Us Despite Persecution" and "Compassion and Majesty" which portrayed practitioners persecuted in China. "I was crying. As I saw the persecuted Falun Gong practitioners taken to heaven, I cried. Good people will be rewarded! My son was puzzled and asked why I was crying."

Zhou was inspired by the story of "The Loyalty of Yue Fei." "I will start to teach my son more Chinese legends which are so educational."

Talking about performers of Shen Yun, Mr. Zhou was very respectful, "These performers are so young and yet they are so talented. They are also very lucky as they are bestowed with the mission to revive Chinese culture. I am very grateful to them. I was surrounded by mostly westerners. During intermission, many around me were looking at me. It seemed that they were saying, 'Chinese culture is great!' I felt so good!" 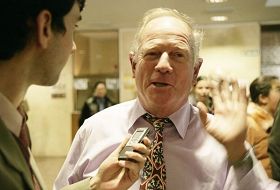 Alberto Garcia is the general manager of a local company and is a also a Tango fan. He said that he was deeply touched by Shen Yun.

"It was truly astonishing. You just cannot express it. The costumes, dancing, orchestra, everything was amazing. I can say this is the best, best, best show that I have ever seen."

Though Garcia has seen world-class shows in Paris, he said that he typically didn't like shows which were note related to tango. However, the Shen Yun show gave him an experience which he could not describe. "I think I was truly touched. I am a tango fan, and I don't usually watch this type of show. However, I feel this show was really good, perfect and outstanding. My colleagues are also very excited. We love this show as it is so good."

Before the second half started, Garcia stressed, "I want to congratulate Shen Yun and thank them for bringing us such a perfect show. I really don't know how to express myself at this moment. I am very excited and completely satisfied."