On June 6, 2009, the eve of the 10th anniversary of Falun Gong's anti-persecution movement, about six thousand Falun Gong practitioners from all over the world staged a grand parade in New York. The parade, whose theme was "Call for Conscience and End Persecution," was as long as eighteen blocks and lasted two hours. It greatly moved people's hearts in New York. 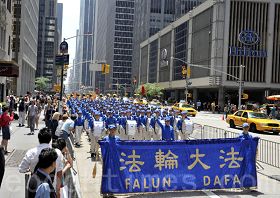 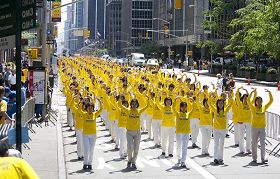 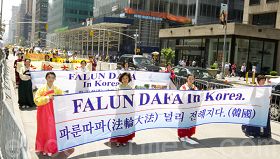 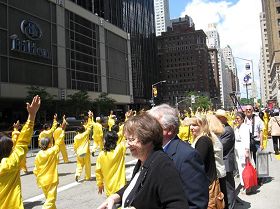 Passersby were fascinated by the parade. 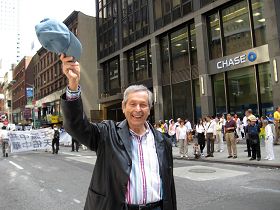 Mr. Louis Srybnik, a well-known film producer, was deeply moved by the grand parade. Excited, he waved his arms to the powerful drum beats of the Divine Land Marching Band and walked quite a few blocks facing the parade. Toward the end of the parade, he took off his hat and bowed to the Falun Gong practitioners. He said, "To my philosophy, this is my very best, and very first moment in my life!"

Mr. Srybnik has visited China several times and has been to places all over China. He understands the condition of the country very well. "For those who under the Chinese communist party, for most of them, they are just making a living there. However, could see that the people in this parade were changing all that, they were living for others. Thanks for what they're making for everyone in this world. That's why I take my hat off when they pass by."

Mr. Srybnik praised the principles of Truthfulness, Compassion and Forbearance. He said the three words looked simple and could be understood by everyone. Everyone should do his best for himself and others. He said he had seen Falun Gong practitioners meditate. They looked so peaceful. He could feel a sense of freedom from them. He said they embodied the spirit of calling for freedom for everyone. It was spiritual freedom. The freedom for the Chinese people, the nation and the whole world! It was really beautiful! 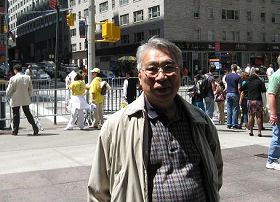 Mr. Sun told the reporter, "My mother is 88. She couldn't come this time. But her heart is with me. I will record the parade, especially the Divine Land Marching Band music so she can listen to it. My mother has been practicing Falun Gong since 1999. She is very strong. She distributes the Epoch Times newspaper every morning. She meant to come this time but she was too busy. She has done the exercises every day for the past ten years. She calls me every day and asks me if I have done my exercises. I told her I was at the group exercise site." Mr. Sun gave a hearty laugh. "My whole family practices Falun Gong. My mother, my sister, they all practice Falun Gong. Falun Gong is great! That's why so many people like it. I feel the whole world is here! It is so moving!...I had bad pain in my back three years ago. I couldn't continue my business. I sold all five gas stations. Medicine couldn't help me. My mother asked me to practice Falun Gong with her. Now all my diseases are cured. I am growing younger." Mr. Sun said that what he gained the most from practicing Falun Gong was the improvement of his heart. He doesn't get upset with others any more. He feels at peace in his heart. Mr. Sun said he has some friends from Mainland China. He plans to give them Falun Dafa book and tell them of the benefits of Falun Dafa through his own experience.

Mr. Wang Desheng, who lives in Flushing, came to watch the parade after reading about it in the newspaper. 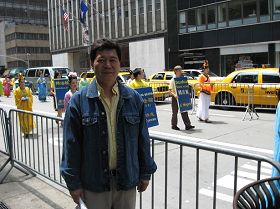 Mr. Wang told the reporter, "Falun Gong is a great cultivation practice. I know many people who have quit their bad habits and become nicer after practicing Falun Gong. But the Chinese Communist Party (CCP) demonized such a great practice. I am very happy and excited to see the spectacular development of Falun Gong all over the world! The CCP's persecution of these innocent people should have stopped much earlier! These kind and tolerant people should have freedom of belief. The more people practice Falun Gong, the more harmonious society will be!"