(Clearwisdom.net) Ms. Zhao Yabin is a Falun Gong practitioner in Tangshan City, Hebei Province. Under the pretense of visiting her, the police arrested her at home. Later, Lunan District Court opened a court session to try her. When she was being taken out of the court, Sun Jian, a staff member of the court, pushed her down from a very high stair. As a result, she was badly injured and could not move. She was carried to Tangshan City People's Hospital. After a CT scan, she was diagnosed with a lumbar vertebra dislocation femur necrosis. Later, she was transfered to an orthopedic hospital where she was given the same diagnosis. Wang Jian, the presiding judge, and another judge were present when Ms. Zhao was injured. 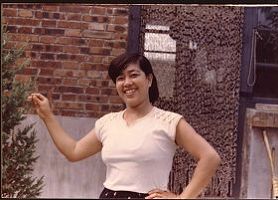 Ms. Zhao Yabin and her son

Ms. Zhao Yabin, 47, lives in the Chengguang Building of Lunan District, Tangshan City. In July 2008, prior to the Olympic Games, Director Chen Changdong of Wenbei Police Station and Guo Yujuan of the residents' committee of Nanbei Street, arrested Ms. Zhao. They pretended to be visiting her home. Later they returned and seized valuables, collectibles and cash without providing any record. 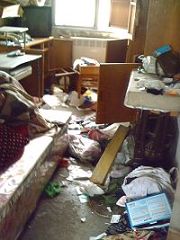 Ms. Zhao's home was in a mess after the illegal search

When Ms. Zhao's family reasoned with Li Lei, Chief of the State Security Division of Lunan District Police Department, he simply said, "I am not here to serve Falun Gong families. I do not have the detailed list of the seized articles. Even if I had one, I would not give it to you."

To achieve the purpose of sentencing her, the police, procuratorate, and court of Lunan District colluded and fabricated an interrogation record and a detailed list of the seized articles to frame Ms. Zhao.

On October 8, 2008, her family members learned that the Lunan District Court would open a court session to try her. However, from the files that her lawyer was provided with, they found that there was no report of evidence collected or list of seized articles, which are necessary for handling a case. In addition, the signature under the interrogation record was not in Ms. Zhao's handwriting. Ms. Zhao did not make any confession nor sign any document. The so-called confession was fabricated by the police. This was verified by her in court.

On the same date, the prosecuting lawyer assigned by the court showed Ms. Zhao's family a detailed list which was not concrete or factual. Her family questioned it immediately. On October 16, 2008, when the open session was held, the procuratorate, acting as public prosecutor, showed another fabricated detailed list of the seized articles. Ms. Zhao's family members pointed out, "This is not the same list we were shown before." The public prosecutor was speechless. But the bailiffs pushed the family members out of the court by saying they were "disturbing the order of the court." Wang Jian, the presiding judge, prohibited Ms. Zhao's husband from making a defense for Ms. Zhao. He seized the defense paper from him. Finally, the judge declared the session adjourned. Ms. Zhao was taken out of the court from the side door. Sun Jian hit her in the back and pushed her down from a very high stair, severely injuring her.

On the same night, Ms. Zhao was carried on a stretcher to Tangshan City First Detention Center. The authorities of the detention center refused to accept her. The staff members of the court mediated with deputy director Zhang. Finally, the detention center accepted her reluctantly. During the next several months, she did not received proper medical treatment. Due to the news blockade, the whole process of Ms. Zhao's arrest and illegal trial was unknown to the outside world until recently.

Ms. Zhao was eventually sentenced to 7 years of imprisonment. She appealed to a higher court, but the intermediate court of Tangshan City still influenced the case and refused that a public trial be held, upholding the original sentence. According to insiders, all the cases of Falun Gong practitioners are influenced by the local 610 Office. The trials held in the court are mere formalities.

Ms. Zhao was taken to the Hebei Province Women's Prison on April 1, 2009. Her family tried to negotiate with the prison to provide her with medical treatment and release her unconditionally.

Her family indicated that they would make further appeals for justice.

“We Are One Body”