Interview: The Window Through Which One Recognizes and Understands the Mystery and Truth of Life (Photos)

How can people live longer and live better? This is a recurring topic in the medical community. This is also a topic a well-known doctor, Mr. Hu Naiwen, has assiduously researched.

Mr. Hu Naiwen used to have his practice in Taipei at Shanghai Tongdetang Chinese Medicine in Taiwan for more than 20 years. He cured numerous difficult and terminal illnesses. Patients and his peers praised his medical ethics and skills widely. For over ten years early in his career, he engaged in cutting-edge life science research at the well-respected Stanford Research Institute (SRI) in the United States. He eventually focused on ancient Oriental medicine, Chinese medicine, acupuncture, and Qigong. It was a return to and his relentless pursuit of these ancient traditions that brought him in contact with Falun Dafa. Dafa cultivation opened a window of recognizing and for understanding the mysteries of life. Let us follow him to learn the truth about health and life. 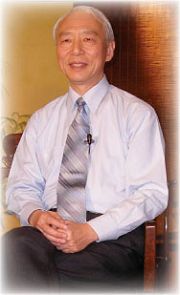 (The following was edited, based on a recorded interview)

This is What I Had Been Searching For

I studied neuroscience and endocrinology, which are cutting-edge areas in modern medical science. I was later on engaged in the study of Neuro-pharmacology, Endocrine Pharmacology, and Psycho-pharmacology study in a world famous research institution for over ten years and made some achievements.

Past cultivation practices such as Buddhism or Taoism that I had heard of focused primarily on one aspect, either "cultivation" or "practice." Falun Gong, though, not only improves the body and health by practicing the exercises but also cultivate people's hearts by having them follow the principles of Truthfulness-Compassion-Forbearance. It is a high-level practice for comprehensively improving one's body, mind, and spirit. Studying Falun Gong's principles carefully and practicing the exercises made me realize this was what I had been searching for! I began Falun Gong practice wholeheartedly.

Lunyu at the beginning of Zhuan Falun, the main book of Falun Gong, says, "'The Buddha Fa' is most profound; among all the theories in the world, it is the most intricate and extraordinary science." Once I started to practice Falun Gong I finally realized that the "Buddha Fa" is the most profound and extraordinary science that modern practical sciences have no hope of attaining.

Only "the Buddha Fa" has been able to perfectly provide a clear exposition of humanity, every dimension of material existence, life, and the entire universe. It opens up a window for me to understand the boundless and measureless world.

In fact, many Falun Gong practitioners have been engaged in cutting-edge scientific research. A considerable number of practitioners have accomplished great things in their respective areas of research. Once they practice Falun Gong, the cultivation gives them more wisdom and helps them improve in xinxing and make advances in the academic realm.

Getting to Know the Truth about Disease and Life

Prior to Dafa cultivation, I had always sought ways to make myself stronger and more energetic, to sleep better and maintain a better memory. Like many people, I followed the [common] scientific and nutritional methods to take in food rich in calcium, phosphorus, other minerals, and protein. But the results were unsatisfactory. I often caught cold and had to use different ways to deal with insomnia.

Once I practiced Falun Gong, my illnesses disappeared without taking medicine. I do not even catch a cold that often anymore. Naturally, I sleep well at night, and my memory improved greatly. My logical thinking ability is better than ever before. It is as if somebody "opened my wisdom." I developed a deeper understanding of many ancient medical writings that are difficult to "digest." More importantly, I understand the true meaning and essence of human life.

From the perspective of Western medical science, bacteria and viruses are the causes of disease. Chinese medical science considers the external causes of illnesses, such as wind, fire, heat, moisture, dryness, and cold. Western medical science's exploration is limited to the superficial. Chinese medical science focuses on the cause of the disease and explores to deeper principles. Cultivators can view this from a deeper and more micro level--the root cause of human disease is "karma." It is due to bad things people did. If people can reflect on their own to correct these faults, eliminate the root cause of disease "karma," practice the exercises, cultivate their mindset, and truly become better people, then the illness will be completely cured without the need to take any medicine. This is the truth about "illness."

Some people think that "karma" is invisible and intangible. It seems mysterious, and is difficult for people to be convinced of it. In fact, what the naked eye can see is extremely limited. The main body in the universe is a substance that is invisible and intangible but actually exists. For example, the naked eye cannot see the existence of acupuncture points and energy channels, nor can Western anatomy. Our ancestors discovered and recorded an accurate map of the body's energy channels through cultivation. Modern technology has proven its accuracy. The most micro-substance that human beings can recognize now is "quarks." We do not know how many more years we would have to wait, if human beings relied on modern technology, to discover the more microscopic evidence of "karma."

Our ancestors learned that cultivating body and mind would enable human beings to improve physically and mentally, thus becoming saints and enlightened beings that could live as long as Heaven and Earth. The cultivation experiences of millions of Falun Gong practitioners are the most recent and extensive examples and evidence of cultivating both body and mind. Medical professionals in Beijing, Wuhan, Dalian, Guangdong, and other places conducted investigations in 1998 on more than 35,000 Falun Gong practitioners. The results showed that the respondents' psychological and spiritual conditions had greatly improved. The disease-curing effect of practicing Falun Gong was up to 98 percent.

The spirit of science should be "to explore the unknown with the known" rather than "to negate the unknown with the known." If people are limited by the practical science and hindered by the notion of "seeing is believing" and do not believe in karmic retribution and the existence of other dimensions and spaces, they will miss the opportunity to sublimate themselves and improve mentally and physically. It us such a pity!

The Power of Righteous Thoughts

Falun Gong is a cultivation way of mind and body. It can help one to return to one's true self.

Regarding "cultivating longevity," Falun Gong has five sets of easy to learn exercises that can integrate the body and mind and open up the energy channels. It helps increase wisdom and strength and promotes the substances and energy exchange between Heaven and Earth. It helps the body reach its best state. Regarding "cultivating character," Western religions stress love, whereas in ancient Oriental cultivation practices, Buddhism stresses compassion, Taoism stresses truthfulness, and Falun Gong is based on the principles of Truthfulness-Compassion-Forbearance. In my understanding, this is not only the standard for our personal cultivation, but also the law of the universe; it is the highest wisdom.

According to modern life science research discoveries, water has feelings and has the ability to receive and transmit information. Human beings' thoughts can change the molecular structure of water. All living things on Earth contain at least 50 percent water. In a human body, the proportion of water is as high as 70 - 80 percent. When one has a thought, water molecules in the body first receive the message. Good information can help the body stay in a healthy, balanced state. When one has evil thoughts, oneself is first the victim. Therefore, the health of a human body completely depends on the person's own good or bad deeds. 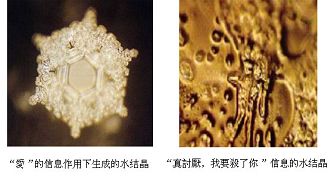 In fact, not only water, but all things have a spirit. The thinking power can be transmitted through the surrounding substances. If we conform to the universe's principles and follow Truthfulness-Compassion-Forbearance, we will become better. Not only are we then happy ourselves, we will also disseminate good messages to others and have a good impact on others and the surrounding environment.

In contrast, if one is not kind, compassionate, and tolerant to others, he/she would not be a good person. If many people in society are not good or are against the laws of the universe, the society would turn out to be dangerous. Because at each level there are basic requirements and standards for the lives at that level, if the lives fall below that standard, they will not be able to stay at that level. Then, "the Heavens will take charge when human beings get out of hand."

According to modern archaeological discoveries, it was for this very reason that the prehistoric civilizations of mankind were destroyed many times. For example, prehistorically, Atlantis was a continent with very advanced civilizations. However, due to the downward slide of morality and the corruption of human beings back then, Atlantis sank to the bottom of the ocean. Another example is the ancient Greek civilization, which was annihilated for the same reason. Human beings have to conform to the laws of the universe and live rationally.

Today in Mainland China, the Chinese Communist Party has been persecuting Falun Gong for nearly a decade. This persecution of the principles of Truthfulness-Compassion-Forbearance has put every life in a very dangerous situation. On April 25, a decade ago, tens of thousands of Falun Gong practitioners went to Beijing for a peaceful appeal to ask for the right to be a good person and follow the principles of Truthfulness-Compassion-Forbearance. That was not only to protect their own belief, but also to maintain the basic standards of human beings living in this world. In times of crisis, domestic and overseas Falun Gong practitioners, in spite of the sacrifices and pressure they have to bear, continue to clarify the truth to awaken people's consciences. This is not getting into politics. This is to save people in danger. It comes from their benevolence and compassion.

Mr. Hu Naiwen has made in-depth studies in modern Western medical science, ancient Chinese medicine, Qigong, and cultivation practices. He cured the fifth case in the world of facial malignant melanoma. In his spare time, he has published books about his medical knowledge and experiences over many years. He passes on his message on how to cultivate the mind and improve health via television, newspapers, radio, and lectures. He helps to bring predestined people to the cultivation path to return their true destiny. Since 2007, he has been invited to give health seminars and academic exchanges to cure diseases for patients and teach skills and knowledge to his peers in North America. His medical ethics and reputation have attracted many people from near and far.