On April 25, Falun Gong practitioners from Yokohama, Japan, held a rally and a parade in Chinatown, commemorating the April 25 Appeal and calling for an end to the persecution. Some democracy movement activists also gave speeches at the rally. 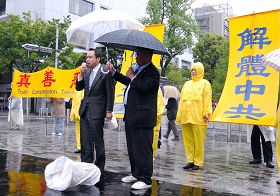 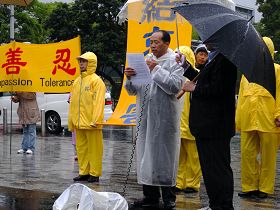 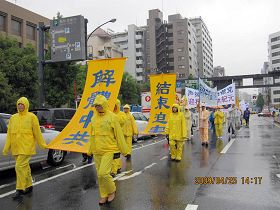 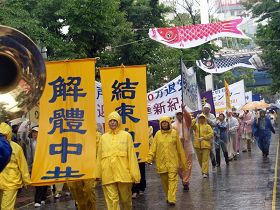 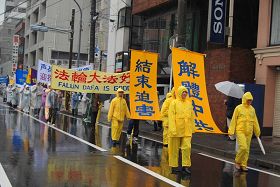 Xie Yunhua, a Falun Gong practitioner, told his own story of witnessing the persecution of Falun Gong. Five of his family members had been arrested, jailed and sentenced. His brother Xie Yunhuan was sentenced to 10 years on August 15, 2002, for having Falun Gong materials.

Ms. Li Na, a Falun Gong practitioner, pointed out in her speech that many people learned about Falun Gong through the April 25 Appeal, and many people see the hope of China through it.

Ms. Wang, who attended the April 25 Appeal in Beijing in 1999, verified, with her own experience, that the appeal was peaceful and legal.

After the rally, practitioners held a parade in the rain from 2:00 to 4:00 p.m. The Divine Land Marching Band led the parade; practitioners introduced Falun Gong and exposed the truth of the persecution to people on the street.

Many citizens expressed that people should have freedom of belief. Some Chinese tourists videotaped the parade; a Falun Gong parade is something they would never have seen in China.

“From Tianjin All the Way to "Normal Appeal Channels"(Photo)”