Tokyo, Japan: A Parade to Support Quitting the CCP and the Expulsion of Top Chinese Official Li Changchun (Photos)

(Clearwisdom.net) The Japanese Service Center for Quitting the Chinese Communist Party (CCP) held a parade in Tokyo on March 29, 2009, in support of the 52 million brave Chinese people who have quit the CCP and its affiliated organizations. They also condemned the persecution of Falun Gong, and called for the expulsion of Li Changchun, member of the CCP Politburo Standing Committee, who arrived in Japan the same day.

A parade in Tokyo supporting withdrawals from the CCP 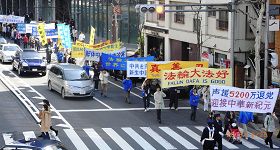 A parade in Tokyo supporting withdrawals from the CCP

Passersby stop to watch the parade

Prior to Li Changchun's visit to Japan, representatives of the Japanese Falun Dafa Association had been to the Cabinet Office and Ministry of Foreign Affairs to deliver an open letter to Prime Minister Taro Aso and Foreign Minister Hirofumi Nakasone. The letter enumerated crimes committed by Li Changchun, who followed former CCP General Secretary Jiang Zemin in the persecution of Falun Gong. The letter asks that Li not be allowed to enter Japan.

The letter continued that based on the above mentioned facts of persecution, Li Changchun was sued as an accomplice to the crime of torture when he visited Paris, France in July 2004. The case was filed in a Paris court. It is reasonable to deny Li Changchun's entry to Japan considering such a criminal record.

During the parade and rally on March 29, a representative of the Service Center for Quitting-the-CCP remarked that Li Changchun seized the position in the Politburo Standing Committee by wholeheartedly following Jiang Zemin to persecute Falun Gong. Japan should deny entry of such a human rights scoundrel and help end the persecution of Falun Gong.

The parade set off from Ebisu Park and marched all the way to another park near the Chinese Embassy. The Falun Dafa Divine Land Marching Band was at the front of the procession. The band performed "Falun Dafa is Great" and "Fa Rectifies Heaven and Earth." The participants of the parade also held several large photos and banners, attracting passersby who stopped to watch. People one after another took truth clarification materials that expose the CCP's atrocities.

A loud speaker kept airing messages about supporting Chinese people who have quit the CCP and are now set free from the evil Party's deception and control, at the same time exposing Li Changchun's crimes in following former head of the CCP, Jiang Zemin in the persecution of Falun Gong. At the end of the parade procession that spanned several hundred meters, were waist drummers in their ethnic folk costumes. Their drums brought great joy to Chinese people who, because of the parade, were made aware of the true nature of the evil CCP. Their performance echoed harmoniously with that of Divine Land Marching Band at the front.

The Divine Land Marching Band performed in the park before the parade set off, attracting many people. An elderly couple, tourists from Hong Kong, took photos of the band and said enthusiastically that they often see parades and rallies supporting the withdrawals from the CCP in Hong Kong. Many people on the parade route enthusiastically applauded and cheered. Some even joined the parade to express their support.