On Saturday, April 25, 2009, more than eight hundred Falun Gong practitioners and supporters held a rally and parade to commemorate the tenth anniversary of the "April 25th" peaceful appeal. The practitioners reiterated their determination to follow the spirit of being compassionate, tolerant, peaceful and rational as demonstrated by the ten thousand Falun Gong practitioners ten years ago, as well as continue to clarify the truth, awakening peoples' consciences, and put an end to the persecution. People who came to show support expressed their admiration and support for practitioners' great feat of resisting the persecution in a peaceful and rational manner, and called upon others from all walks of life to work together to stop the brutal persecution by the Chinese Communist Party (CCP). Spectators on the roadside were amazed at the peacefulness and solemnity of the procession. 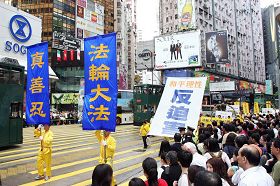 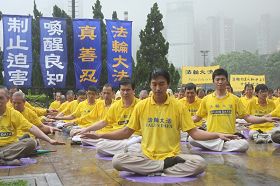 Hundreds of practitioners do the sitting meditation, unaffected by heavy rain 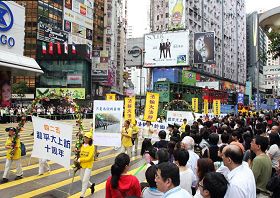 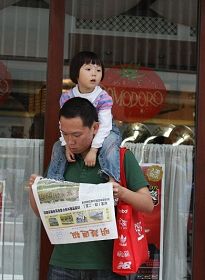 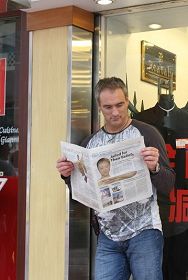 Although the rain poured down with thunder in the morning, hundreds of practitioners from Taiwan, Japan, and Singapore remained unaffected, and lined up in good order to do the exercises in Victoria Park.

Szeto Wah: The brutal suppression has persisted for ten years

Szeto Wah, Chairman of the Hong Kong Alliance in Support of Patriotic Democratic Movements in China, addressed the rally through a video. He condemned the CCP's crime of brutally suppressing Falun Gong, which has persisted for ten years. He said that Falun Gong practitioners in China are not only arrested and incarcerated, but even have their organs harvested while they are still alive, a very inhuman practice. In his opinion, the CCP's behavior will inevitably incur opposition from many more people, another reason why the recent "three withdrawals" drive (withdrawing from the CCP and its two youth organizations) initiated by Falun Gong practitioners has won support and positive response from so many.

Leung Kwok-hung: The rights of the oppressed will be secured

Leung Kwok-hung, member of the Legislative Council of Hong Kong, publicly protested the CCP's suppression of Falun Gong ten years ago. He expressed his admiration and support for Falun Gong practitioners who are still subjected to the persecution. He said, "Even a very soft voice, even if everybody only speaks out in a soft voice, their voices will coalesce into very powerful sound. Only if we, as people who have been deprived of authority, continue resisting the strong power running rampant, will the rights of people with no power be demonstrated."

Several renowned people also addressed the rally to express their support for Falun Gong practitioners' anti-persecution efforts. Former Legislative Councilor Reverend Fung Chi-wood said, "I firmly believe that Falun Dafa will soon be spread on a larger scale in China than it was before. And it will yield fruit. Just like the current situation in different places around the world, there are more people and places where people practice than ten years ago."

Albert Lam, a central committee member of Hong Kong's Democratic Party, said that no matter from which Party, everyone should unite to help Falun Gong secure the human rights and freedom of religion that they should be granted.

Theresa Chu, director of the Human Rights Law Foundation Asia, made a special trip from Taiwan to take part in the day's event. She thanked the practitioners who appealed for Falun Gong ten years ago for bringing hope to the whole world. She said, "Your appeal let us see the hope of peace since the CCP seized power in mainland China. Your moral courage let people around the world who have almost lost confidence see again such a great Dafa spread in China. You're the hope of China."

Mr. Jia Jia, former Secretary General of the Shanxi Province Scientific and Technological Expert Association, who broke away from the CCP and currently lives in New Zealand, addressed the rally via a recording. He praised Falun Gong practitioners' peaceful and rational anti-persecution efforts. He said, "Falun Gong's peaceful resistance against the CCP persecution has gone on for ten years. They have become more steadfast and mature. No matter how big the difficulties they have been confronted with, no matter in how dangerous the situation, they have remained the same. Such a spirit is a treasure that will triumph over the evil CCP."

When the rally concluded, the rain stopped. At 2:30 p.m., led by the Divine Land Marching Band, a parade of more than eight hundred people set off from Victoria Park and marched along the main streets of Hong Kong Island. Participants held a variety of flags and banners, peaceful and solemn, attracting a lot of passersby who stopped to watch.

Many tourists from China took photos with their cell phones or cameras. The majestic music performed by the Divine Land Marching Band and the precision of the the procession cleansed people's hearts and souls. Some people looked at the parade attentively, some smiled, and some murmured, "How peaceful!"

Practitioners distributed truth clarification materials along the parade route, including "Minghui Weekly" and Falun Gong Today. Many people started reading them right away.

Many Hong Kong citizens recognized the anti-persecution and quitting the CCP themes. They think it is a good thing to quit the CCP and its affiliated organizations and look forward to Falun Gong being spread widely.

One citizen told the reporter, "My friend told me that today, April 25th, commemorates the tenth anniversary of the persecution. I'm dissatisfied with the CCP. What I like the most is quitting the CCP. It (the CCP) has ruled the country badly and treated people badly."