(Clearwisdom.net) On April 24, 2005, practitioners in Holland gathered in front of the Chinese Consulate in The Hague to commemorate the tenth anniversary of the April 25th appeal and protest CCP's brutal persecution of Falun Gong. 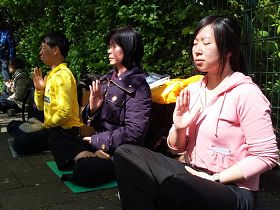 On April 24, 2005, practitioners gathered in front of the Chinese Consulate in The Hague to commemorate the tenth anniversary of the April 25th appeal

Ten years ago, ten thousand Falun Gong practitioners held a peaceful appeal in Beijing to ask that they be allowed to practice in peace. That quiet appeal caught the attention of the world. Unfortunately, on July 20, 1999, the Chinese Communist Party initiated the brutal persecution of Falun Gong. The brutality has last for ten years.

On the morning of April 24, practitioners performed the exercises in front of the Chinese Consulate to protest the CCP's violence. The consulate's front door was shut, an unusual occurrence. In the morning, more than a dozen people were waiting for visas. The consulate issued a notice that it would be closed due to a protest activity nearby.


Seeing the practitioners peacefully doing the exercises across the street, the people waiting for visas and the police were puzzled as to why the consulate did not dare to open and what was it afraid of?

The police officer disclosed that high level Holland officials and the Foreign Affairs Ministry had contacted the consulate and asked that they open and process visa applications.

“International Society for Human Rights: Systematic Torture in the People's Republic of China”

“Ottawa, Canada: The April 25th Appeal Will Be Remembered (Photo)”