International Society for Human Rights: Systematic Torture in the People's Republic of China

Despite economic splendour and the Olympic shine, the People's Republic of China (PRC) is undoubtedly a one party dictatorship. Censorship and immense human rights violations, such as the use of systematic torture, take place on a daily basis.

The People's Republic refuses fundamental human rights to their own brothers and threatens their democratic neighbours. This threat, the systematic torture and violations of human rights, as well as the millions of slave labourers in the so called re-education camps are hardly getting public acknowledgement.

Arbitrariness and intimidation by the authorities, which are controlled by the CPC (Communist Party of China), take place on a daily basis. They serve the purpose of securing the dominance of those in power and ensuring personal enrichment of individual officials. A means of preserving such a system is achieved by use of intimidation in a court of law, the predetermination of judgements by the CPC, arbitrary arrests, slave-like forced labour in institutions for "re-education" and the suppression of a self-developing democratic society. The most effective method is to place people in the labour camps, where they are re-educated and tortured.

Torture is widely used and systematically implemented by the Chinese authorities, despite torture being officially forbidden. The victims are very often civil rights advocates, unionists, democratic activists, members of non-state-controlled Christian churches or Buddhist schools of meditation and representatives of ethnic minorities, like the Tibetans and Uyghurs. The torture takes place in Police stations, re-education and prison camps, interrogation centres, prisons, re-education centres, psychiatric facilities and other places of detainment. Hundreds of thousands of Chinese have become victims of these cruel and unbearable activities.

Against the Convention against Torture

The People's Republic of China was one of the first States to sign the United Nations' Convention against Torture on 12 December 1986 and ratified this on 4 October 1988. The Convention is a binding international contract. This is presumably the reason the People's Republic accepted the terms with two conditions. They refuse the suggested means of successfully guaranteeing no torture: "(1) The Chinese Government does not acknowledge the competence of the UN Committee against Torture, as prescribed in article 20 of the Convention. (2) The Chinese Government is not bound by the first paragraph of article 30 of the Convention." Without the option of controls or arbitration, the convention is ineffective. The ratification of it merely serves the purpose of shedding a positive light on China's image, in terms of torture.

It was a big surprise when after 10 years of efforts; the PRC permitted a visit by the law-professor of Vienna, Manfred Nowak. During his visit from the 20 November till 2 December 2005, the 'Special Rapporteur on torture and other cruel, inhuman or degrading treatment or punishment' was allowed to visit various prisons. He was not allowed to do this independently and had to adhere to many limitations though. At the end of his visit, in a press conference on 2 December 2005, he stated, without consideration of the usual diplomatic etiquette, "That some government officials, especially the Ministry of State Security and Public Safety, tried repeatedly to restrict and impede his efforts of finding information, during his visit. He and his team were often watched in their hotel in Beijing as well as in the immediate area by employees of the Secret Service. Also a few supposed victims and their family members were intimidated by the Security personnel and were under Police observation. They were instructed not to meet the Special Rapporteur or they were forcefully prevented from doing so. (...)"

"The Special Rapporteur would like to bear in mind that his predecessors had heard of countless reports of torture and other forms of abuse in China over the years, which were presented to the Government for a public statement. These reports always contained a systematic pattern of torture against ethnic minorities, especially Tibetans, Uyghurs, political dissidents, human rights activists, practicing Falun Gong and house church groups. These accusations were and are still being documented by international Human Rights Organizations."

"If the Chinese law (...) would also forbid torture (...), then the Chinese definition of torture would not live up to the international standard of the Convention against Torture. Especially physical or psychological torture which do not leave behind any physical evidence, make it impossible to press forward any punishments. (Actually the Chinese word for torture, kuxing, mainly describes physical torture). The fight against torture in China will remain difficult because there is no procedural protection, which is necessary to effectively forbid torture, (...)"

"During his mission the Special Rapporteur noticed the ineffectiveness of the current complaint system. He was told, for example, that in the prison number 4 in Urumqi, no lawyers have received a complaint of torture in the last ten years. (...)"

Every citizen of China can, according to the law of the People's Republic, be forced to work in a camp for three years for the so-called "re-education by work", without being charged of a crime, standing for trial, receiving a judgement or being able to appeal. All that is needed is a decision by the police which is dependant on the CPC. The reasoning for such disenfranchisement is still today based on political arbitrariness. In order to be sent to one of the many re-education camps, all that is required is to criticise the Communist Party, the corruption of cadres, the all surrounding censorship, wanting an employment representation or freely expressing ones opinion.

The Laogai Research Foundation's founder and manager, Harry Wu, a board of trustees' member of the ISHR, has been able to identify 1000 camps. The number of prisoners in these camps is estimated at 4,000,000 people. Millions of Chinese are victims of this kind of confinement. They are misused as work slaves, while the Chinese Government bathed itself in glory at the Olympic Games.

Almost every prisoner in China had or has to endure being beat and kicked. This most frequent use of mistreatment is often clearly visible once a prisoner is released, since they suffer from extensive bruising and physical injuries.

No Visible Evidence Meant to Show

A number of victims reported that weeks before their release the physical torture, which would leave behind visible evidence, had stopped. Beatings or other torture methods leave behind wounds on the victim, which do not get medical attention or are treated far too late. Inflammation and greater pain is the result from further abuse.

Political prisoners are often not only beat with fists, but also with cables, belts and belt buckles or with sticks. Some police officers, who are members of the Ministry of State Security, and who are warden and re-education personnel in the PRC, have, according to the torture survivors, reached the maximum level of professionalism in terms of torture. They are able to cause excruciating pain without much effort, for example by hitting the genitals or inflamed wounds, etc.

The most common methods of torture are hitting, kicking and electric shocks. Frequent abuse is also caused by cigarette burns, spending forced periods of time in painful positions, which can last for days, being beat by fellow detainees because they were ordered to do this by the wardens, overstretching of body parts, near drowning or suffocation, sleep, food and drink deprivation, puncturing of body parts, and the refusal of medical care and medicine. 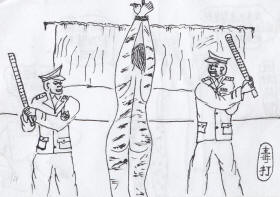 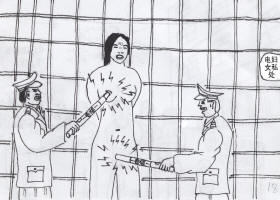 methods of torture and abuse in the People's Republic of China ...

Female political prisoners are especially at risk of becoming rape or gang-rape victims during their time in the re-education camps.

The victims are either abused by the police and wardens or they are put into cells with male inmates. Some women are already stripped naked before being put into the cell. The wardens then let the male inmates know that they can abuse the woman without needing to fear any punishment. Male political prisoners also become victims of sexual abuse by homosexual inmates or wardens.

The perversion of some of the members of these Chinese Security Institutions has no limits according to torture survivors. Policemen and members of the Ministry of State Security have for example forcefully inserted various objects, such as bottles, sticks and brushes, into the victims' vagina or anus.

The victims of this abuse find it especially hard to report about these experiences. The offenders, who clearly have the approval and who act in the intentions of the CPC, do not have to fear that their actions will be punished. Instead human rights lawyers and civil rights activists demanding the implementation of the officially ratified torture prevention convention become victims of harassment, intimidation and arrests. Some of them, like the most famous human rights activist Gao Zhisheng, have "disappeared" since their arrest.

“A 28-Month Nightmare - The Ruthless Abuse of Mr. Wang Wei”