(Clearwisdom.net) The 2009 Taiwan National High Schools Games opened at dusk on April 18, 2009, at Miaoli County Stadium. At the opening ceremony, the Falun Gong Divine Land Marching Band led the official flag into the stadium, becoming a focus of the audience's attention. 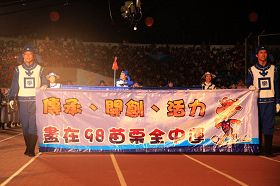 The annual National High School Games features athletes from 6,357 middle and high schools in 25 counties and cities across Taiwan. They compete in 13 track and field events over five days of competition.

At the opening ceremony, the official flag of the Games entered the stadium led by the Divine Land Marching Band, marking the formal beginning of the five-day track and field events. The band's discipline, uniformity, exuberance, and lively performances won the enthusiastic applause of the more than 30,000 spectators. The Falun Dafa cultivators' peacefulness and high spirits, as well as their traditional costumes, caught the attention of the crowd as soon as they appeared.

During the ceremony, the audience was mesmerized by the wonderful performances, laser lights and sound, a colorful and brilliant fireworks show, and the fun-sports carnival. Speaking at the opening ceremony, Vice President Vincent Siew said that the National High School Games is a cradle to nurture top athletes. He encouraged the athletes to not only pursue success, but also to bring their spirits and good sportsmanship into full play. He hoped that all the athletes would put forth their greatest efforts. He also praised the Games for preparing such wonderful performances and offered his appreciation to all the athletes for their hard training.