(Clearwisdom.net) The sky gradually became cloudy, followed by a fierce wind for a while, so the people passing by the central Helsinki train station had no choice but to speed up their pace in the cold wind. However, a group of Falun Gong practitioners continued to stand there, holding the placards in their hands which read: "Falun Dafa practitioners who believe in Truth- Compassion-Forbearance are victims of brutal persecution." 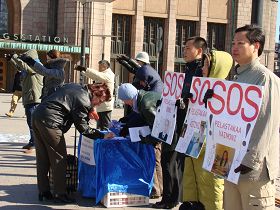 Signing in support of Falun Gong, despite the windy conditions 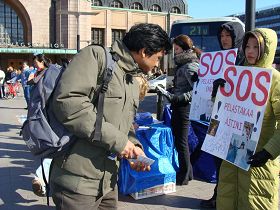 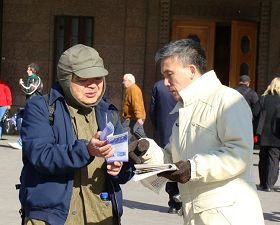 A practitioner explains the true situation of the persecution in China

On April 18, 2009, practitioners gathered at the Helsinki central train station, as they have done in the past, and although the fierce wind sometimes blew the banners down and scattered the display boards, the practitioners did not depart. One by one they handed out flyers which explain the true situation of the persecution in China while four practitioners demonstrated the exercises. Many people stopped by to have a look despite the wind. They inquired and signed their names against the persecution.

A police car drove up, and after the police learned the situation, walked up to the signature collection table and said, "If anybody comes and causes a disturbance, don't worry, please contact us immediately by phone."

A mother and child stopped at the petition table, and the mother said to the daughter: "Do you still remember? When we were at the train station in Hong Kong we saw Falun Gong practitioners, and many photos depicting brutal torture were displayed. Those things are still happening in China." When the mother signed her name, the daughter was looking at the exercise demonstration next to it, and expressed her thanks to the practitioners, and wholeheartedly hoped that the persecution will immediately stop.

A Japanese tourist told practitioners that he had traveled to many countries, and could see Falun Gong practitioners clarifying the truth to people everywhere, and he expressed that exposing the evil is the right thing to do, and that he very much supports this activity.

Practitioner Ms. Jin held in her hands a display board reading "SOS help my mother", which drew in a lot of pedestrians inquiries, who asked what had happened. Ms. Jin's mother Chen Zhenping lived in Zhengzhou City, Henan Province, and used to be a late period sufferer of hepatocarcinoma, but regained a new life because of practicing Falun Gong. She had been illegally arrested many times and put in jail by the CCP because of persisting in her cultivation practice. On July 8, 2008, she was again arrested, and was illegally sentenced to eight years. After understanding this, people were alarmed and felt that it was unthinkable. They signed their own names one by one expressing their support for Falun Gong.

“France: Clarifying the Facts about Falun Gong at a Human Rights Rally in Nice (Photo)”