(Clearwisdom.net) On March 7, 2009, Falun Gong practitioners in Hannover, Germany, held an activity in the city center to support 50 million Chinese people that have quit the CCP and its affiliated organizations.

That morning at 10:30, it was very cold and drizzling. In about an hour, both the wind and rain stopped, and the sun came out. Passersby, one after another, came to the information booth to learn more. 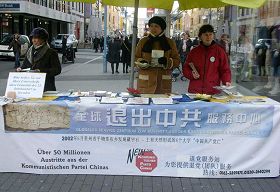 The service booth for quitting the Party 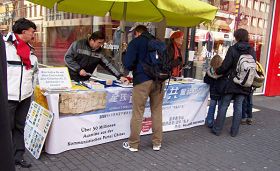 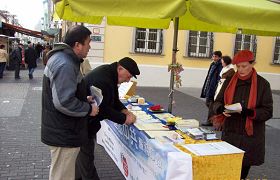 At the booth, a woman learned in detail about the movement to quit the CCP and its affiliated organizations. She took away many materials with her when she left. She said that she would distribute them to her colleagues in her company and also let them know what is happening in China.

When she passed by the information booth with her German husband and saw the banner "Supporting 50 Million Chinese People Quitting the CCP," a woman from northeast China told a practitioner that the Party is so bad that the things it does in mainland China are extremely evil. She expressed her support for the activity in which practitioners were encouraging Chinese people to quit the CCP and its affiliated organizations. She kept telling her husband, "What is written in these materials are all facts and this is true."