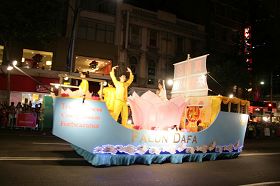 The parade started at 8:00 p.m. from the city hall, and ended around 10:30 p.m. in Chinatown. About twenty-five hundred people performed in the parade, one of the city's most popular local events.

The Divine Land Marching Band, consisting of local Falun Gong practitioners dressed in traditional Chinese costumes, also performed in the parade. A float decorated with lotus flowers followed the band. Both were warmly welcomed by the spectators.

A young man from Shanghai, China, said: "Falun Gong is truly great. I admire them. China will have hope if there are more people like them. I am proud of them."

Many people took photos of practitioners and asked for Falun Gong informational materials.