I Was Bound to a Metal Chair for 17 Days in Changlinzi Forced Labor Camp, Harbin City, Heilongjiang Province (Photo)

(Clearwisdom.net) My name is Lang Xianguo. From April 25, 2005, to April 24, 2008, I was detained in Changlinzi Forced Labor Camp in Harbin City, Heilongjiang Province. During these three years of persecution, I was bound to a metal chair twice in a small cell. The guards used electric batons to shock me and force-fed me. They tried to deceive and threaten me. They also tortured me by not allowing me to sleep. The following is my experience of being bound to a metal chair.

On August 1, 2006, in order to resist the CCP persecution, all the practitioners in the labor camp went on a hunger strike. We stopped eating and drinking and refused to do the hard labor. On August 2, the guards started the brutal force-feeding. I tried my best to not cooperate and yelled for the other practitioners to not cooperate with the force-feeding. The Fifth Warden, Zhao Shuang, told the other guards to restrain me on a metal chair in the small detention room. My hands and feet were tied and then secured with iron rings. They put tape over my mouth to silence me. I was not even allowed to be released from the chair when I had to urinate. Zhao Shuang used electric batons to shock me. He yelled and screamed like a wolf; the entire place was horrifying. 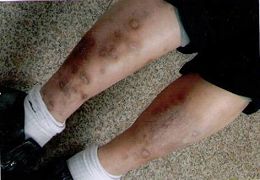 Due to being tied to the chair without moving for so long, my feet, hands, arms, and legs became swollen. The metal rings cut deep into my flesh. Because we were kept in the dark, wet and moldy labor camp, many practitioners developed scabies. I had scabies on my legs as I was kept on the metal chair for long periods. The area with the scabies began rotting. On the most serious wound, the festering nearly reached the bone. It smelled really bad and attracted many flies and mosquitoes. I was unable to sleep at night and unable to go to the bathroom. When they force-fed me, the tube made my nose bleed nonstop. Zhao Shuang and Deputy Warden Qiang Shenguo told the labor camp personnel in private not to look after me. They were told not to give me a container when I needed to urinate so that I would wet my pants. On the fifth night of the hunger strike, at about 10 p.m., Zhao Shuang and Qiang Shenguo wrapped another practitioner's head with a plastic bag. He was also tied to a chair. They stopped when the practitioner almost suffocated to death. They used this method to threaten us. I was tied to the metal chair for a total of five days that time.

On October 29, 2007, the Fifth Ward started another round of confinement in order to target the practitioners who were protesting the persecution. The guards took away some of our Dafa lectures. I went on a hunger strike and refused to work in the labor camp in order to resist this persecution. I practiced the exercises and proclaimed "Falun Dafa is good!" On October 30, 2007, after breakfast, Wang Kai, who took over Zhao Shuang's warden role; Deputy Warden Qiang Shenguo; and political instructor Yang Yu asked me if I intended to continue the hunger strike, do the exercises, and refuse to work. I did not think--I just answered yes. Wang Kai gave the order, and guards Yang Yang, Lu Xuemin and the other guards ganged up on me. They dragged, pushed, and forced me onto the metal chair again. I tried my best to resist them and exclaimed, "Falun Dafa is good!" The other practitioners heard me and they cried out "Falun Dafa is good!" with me. Our cries were so loud that they could be heard in the sky.

The guards were very scared, so they used tape to seal my lips. They then used rope to tighten me against the metal chair. I was not able to change my position; it was too difficult to make any movement. I was not allowed to go to the bathroom, either. This happened in late autumn in northeast China. During this season, the temperature changes dramatically between morning and evening. The metal chair was especially cold at night. The prisoner guarding solitary confinement knew the truth about Falun Gong. He knew that practitioners are good people. He treated me very nicely, and he secretly provided clothes and a blanket for me to keep warm. When Qiang Shenguo found out, he reprimanded the prisoner and did not allow him to take care of me anymore. Qiang Shenguo did not allow the prisoner to tell anyone that he had given the order.

This method of persecution caused both of my legs to become very swollen. The wounds became worse before they were healed. My legs were numb and I couldn't walk. A person tied to a metal chair for more than two weeks will develop muscular atrophy and the tissues in the muscle will eventually decay. This had happened to someone before. This time I was attached to the metal chair for 17 days.

Thank you, Teacher, for looking after me. I was able to recover very fast and regained the ability to move. Until I left the force labor camp on April 24, 2008, there still were scars and black spots on my legs. The above photo is evidence proving that I was physically tortured by the CCP. The picture was taken on November 18, 2008. Although it is now one year after the incident, I still have many scars.

“Some Experiences in Validating the Fa Through My Work”