The Divine Performing Arts (DPA) Touring Company played to a full house at the Durham Performing Arts Center on the evening of December 28, 2008. The magnificent singing and dancing captivated the diverse audience. 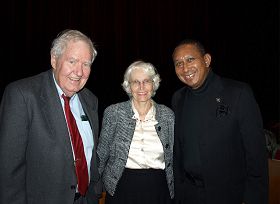 North Carolina State Senator Floyd McKissick also attended the show. He said that it was really an exhilarating experience. The costumes, performers and stage settings were graceful and elegant. He said that he was grateful to DPA for bringing the show to Durham.

Law professor Dan Pollitt also had high praise for the show. He called the show, "Fabulous, incredible." He was impressed by the lightness and gentle movements of the dancers, the vigorous Tang drums, and vivid and interesting backdrops. He said that it was a perfect convergence. He commended the show for having high standard and being authentic.

Professor Pollitt has engaged in research on the First Amendment and freedom of speech for over 50 years. He said, "I'm a person who respects freedom of speech. I have been pondering many times why (the Chinese Communist Party) forbids the persecuted Falun Gong practitioners to voice their minds, and forbids them to freely choose their belief." "They have not hurt anybody, and the persecution is really bad," he added.