A middle-aged German woman watched the scene for a long time, as a Chinese woman in white was handcuffed with an iron chain in a wooden cage smaller than a person's height. Her clothes had blood stains on them. A Chinese policeman held a stick high as though he was going to beat her. This was a re-enactment of the Chinese Communist Party's (CCP) torture of Falun Gong practitioners in labor camps in China. The German woman turned her head away with tears in her eyes and said, "It's so horrible!"

The next reenactment was harder for her to imagine. A person lay on an operating table. The white bed sheet was also full of blood stains. A doctor in white with a scalpel in hand appeared to remove that person's organs. This was a reenactment of the CCP's organ harvesting from living Falun Gong practitioners in China for profit. 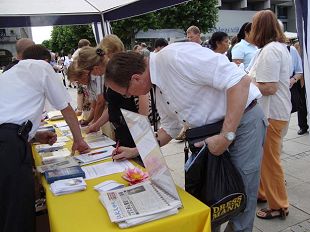 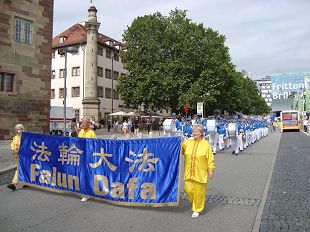 Falun Gong group marches through the city center of Stuttgart 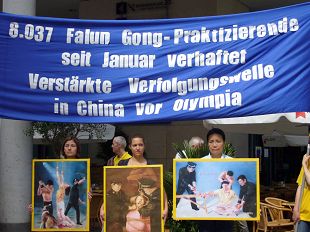 Banners: From January of this year, more than eight thousand Falun Gong practitioners were arrested. The CCP has escalated the persecution.

Falun Gong practitioner Ms. Li from Weilam Rhein participated in this re-enactment of CCP organ harvesting. "I felt cold and shocked all over my body when the operating tool touched my stomach, even though there was a layer of quilt in between. I could feel the horror that Chinese practitioners experienced." Although the sunshine was scorching at noon, Ms. Li, who is nearly sixty years old, insisted on acting for quite a long time. "Later, I was asked whether I would continue playing the part of the victim. I felt that it was nothing compared with practitioners' suffering in China. We should do more in order to alleviate the persecution they are suffering."

Mr. Buntin, who works in a logistics department said, "I can imagine this kind of thing could exist in China. One reason is that the CCP wants money. The second one is that there are very few people donating organs in Europe." "As to organs from China, if I didn't know whose body they came from, I wouldn't accept the organs. Because it doesn't conform with ethics, the CCP has not even the tiniest concept of ethics in this aspect."

Mr. Buntin was shocked by the cruel torture in this twenty first century. He has been to Shanghai. When mentioning his impression of Shanghai, he said, "I have been to Shanghai, and what I saw was just a cosmetic sham. But if you looked at those construction workers, you would see that they were not treated in accordance with human rights. It made me angry. The Chinese government is arbitrary and corrupt. When foreigners go to China, the Chinese government shows them a nice side. They smile in front of you, but are holding butcher knives behind their backs. The same problem occurred during the Beijing Olympic Games. At first the CCP promised the International Olympic Committee they would grant freedom of the press. But now the promise is not kept. I think our Premier and President are correct in not going to attend the Olympic opening ceremony."

Mr. Rau told the reporter after signing the petition, "The CCP should be condemned for suppressing different voices, and for the persecution of Falun Gong. It is awful, and without freedom of thought. If only one person signs a petition, it doesn't have an effect. But if many people sign the petitions or hold a protest like today, I believe, it must have some effect."

Looking at the peaceful Falun Gong exercise demonstration, Ms. Monika Imhoff said, "I think meditation is great, very peaceful. If everyone holds a gun, everything will be destroyed. Meditation is a culture, I also want to give it a try." Ms. Imhoff was born in 1946, just as World War II was ending. She said, "In China some people are locked up in labor camps. It reminds me of German history of sixty years ago. It was very horrible. We Germans have experienced tyranny. Although I was born after World War II, I found out lots of facts later on." Before she went to sign the petition, she continued, "I am against all forms of persecution. In China there are many Falun Gong practitioners being persecuted. I cannot imagine how many there are. The persecution must end immediately, because it violates universal standards of human rights."

Falun Gong practitioners who joined in this activity were not only from Stuttgart. Practitioners from neighboring countries, including Belgium, Austria, Switzerland and Holland, from the European Divine Land Marching Band also came to play a musical performance. Ms. Imhoff especially liked the sound of the drums, saying, "The drum sound is excellent."

Many more people enjoyed the band's performance, giving it their enthusiastic applause.