(Clearwisdom.net) Stuttgart--A middle-aged German woman watched the scene for a long time, as a Chinese woman in white was handcuffed with an iron chain on her wrists in a wooden cage smaller than a person's height. Her clothes had blood stains on them. A Chinese policeman held a stick high as though he were going to beat her. This was a reenactment of the Chinese Communist Party (CCP)'s torture of Falun Gong practitioners in labor camps in China. The German woman turned her head away with tears in her eyes and said, "It's so horrible!"

The next reenactment was harder for her to imagine: A person lay on an operating table. The white bed sheet was also full of blood stains. A doctor in white with a scalpel in his hand appeared to remove that person's organs. This was a reenactment of CCP's organ harvesting from live Falun Gong practitioners in China for profit. 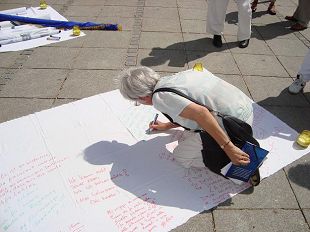 A German woman is writing her support message for the human rights of Falun Gong practitioners. 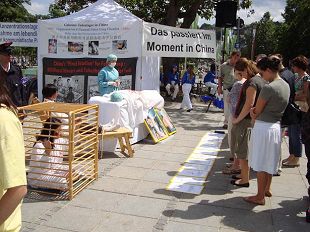 Spectators in front of the reenactment of CCP's torture methods 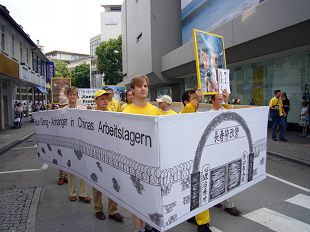 This is what happens in the labor camps in China. 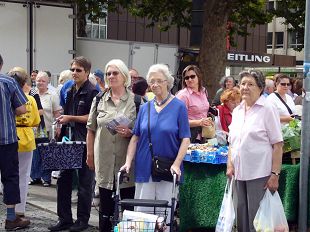 Serious expressions on the spectators' faces when they see the photos exposing the CCP's torture methods in the parade.

On August 2, 2008, many residents and visitors went through Schlossplatz in downtown Stuttgart. They silently watched the reenactment of the CCP's torture methodMany people stopped to listen to the speeches. The Director of the German International Society for Human Rights, Mr. Koerper, and Wu Manyang talked about the human rights situation in China. The head of the European Delegation of the Coalition to Investigate the Persecution of Falun Gong (CIPFG) exposed the CCP's organ harvesting from live Falun Gong practitioners in China. When Liu Wei, studying in the Department of Architecture in Dortmund University, talked about her experience of being persecuted in the Beijing Female Labor Camp, some young Chinese students passed by. One of them shouted in German, "It is a lie." Lui replied in German loudly, "It is not a lie. It is my personal experience. Falun Gong is good. Remember, Falun Dafa is good!" The host took the microphone and told the German people who were listening to the speeches, "Many Chinese people, especially young people are victims of the CCP's propaganda. For example, they don't even know a massacre occurred on Tiananmen Square in 1989, because Chinese media reported that the Chinese army did not kill any person, but the 'evil' students killed the soldiers instead." When Ms. Liu finished her speech, the German audience applauded for her.

Ms. Wang, a Falun Gong practitioner from Berlin, sighed for the reactions of the Chinese passersby. "Everyone's choice is different," she said, giving examples. There were three young male college students, who had been in Germany for one year. When Ms. Wang gave them the truth-clarification materials, two of them quickly walked away. But the third received the literature and asked, "What on earth is happening in China?" Ms. Wang talked with him for a long time and gave him the Nine Commentaries on the Communist Party until one of his companions asked him to come away. What moved Ms. Wang was that as she talked with the Chinese student, a Vietnamese who played the role of a police officer in the torture reenactment came up, handed the student a booklet, and told him in German, "Don't be afraid." The Chinese student replied, "I'm not afraid." "Actually, everyone is facing choices at every moment." Ms. Wang said, "This young man chose to open his eyes and chose not to fear. He admitted that he didn't know the facts and he wanted to know. This is the first step to havingMs. Wang also met three Chinese mothers with their children. She thought that their reactions were also quite typical. "One of them was very agitated. She pointed at the reenactment of the CCP's torture methods and shouted to the other Chinese women, 'Look! They are saying something bad about China!'" Ms. Wang said, "I was like her before. I could not tell the CCP from China. Whenever someone criticized the CCP, I thought they were saying something bad about China, but later, a German lawyer told me, 'What we German people oppose is the CCP's autocratic government. We support the Chinese people.' So I can understand that many Chinese cannot understand it because of the brainwashing instilled by the CCP for so many years." After listening to Ms. Wang's explanation, the woman became quiet, though she still had a look of strong resistance. Ms. Wang recalled, "The other women with her did not talk. One walked to the reenactment of the CCP's torture methods. She was very shocked. She walked to the display boards to take truth-clarification materials and talked with Falun Gong practitioners. Another accepted the truth-clarification material of Falun Gong regardless of her companion's opposition."