In a recent interview, Mr. Goran Lindblad, vice president of PACE (Parliamentary Assembly of the Council of Europe) and head of the Swedish PACE delegation, stressed once again, "The persecution of Falun Gong by the CCP is absolutely unacceptable." 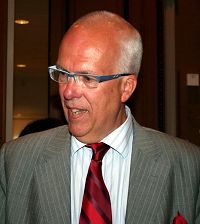 The Chinese Communist Party (CCP) has persecuted Falun Gong for nine years since starting the persecution on July 20, 1999, and it still continues. Mr. Goran Lindblad stated, "This is unacceptable. The CCP regime regards Falun Gong as its enemy. I think that the persecution launched by them is wrong.""We absolutely cannot accept the fact that crimes of removing organs from living people are happening right now and Falun Gong practitioners and Christians are illegally put into prison and then are forced to obey the communist theories."

On the afternoon of July 9, 2008, the European Parliament held their plenary meeting in Strasbourg, discussing the situation in China before the Olympic Games, and the Sichuan Province earthquake. Together with other representatives of various parties, non-governmental groups and MPs from the European Parliament, Mr. Lindblad has strongly condemned the continuing human rights violations by the CCP. In recent years, Mr. Lindblad has repeatedly made speeches on different occasions protesting the persecution of Falun Gong practitioners.

Referring to the CCP's methods of violence and deception, Mr. Lindblad stressed, "This is the basic characteristic of Communism and the dictatorship of the proletariat in that it is somebody who decides what people should do. I strongly object to this point. In fact, this is not feasible, neither feasible in China nor in the Soviet Union nor in Cuba. It is not feasible in any place."

He added, "The Communist Party fears any point of view beyond the scope of their ideology, regardless of any ideologies. They do not tolerate any non-compliance matters. Since Lenin started his revolution in Russia in 1917, the Party had been adopting the means of repression of different views, even imagined different views."

Mr. Lindblad continued, "I know some Falun Gong practitioners. Although I don't understand the philosophy of Falun Gong much, I think they have the right to practice their own beliefs and they are all very good people."