France: Falun Gong Practitioners Invited to a Perform at "A Night of China" Show in Paris (Photos)

(Clearwisdom.net) On June 7, 2008, the Beauchamp district of Greater Paris held its annual dancing and entertainment evening for its sports persons in the city's sport club. The main theme was "A Night of China." They invited Falun Gong practitioners from Paris to participate. 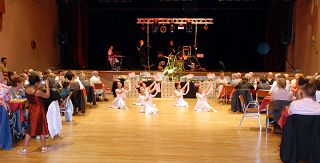 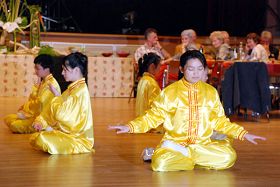 Sports persons in the party appreciated the traditional dances performed by Falun Gong practitioners, which included "The Lotus Flower Dance," "The Handkerchief Dance," and "Heavenly Beauties Spreading Flowers." There were also waist-drummers, a Chinese flute solo, a demonstration of the Falun Gong exercises and an exhibition of clothing from various Chinese dynasties. The audience responded to each program with warm applause. Sports persons also expressed their hope that the brutal persecution and killing of Falun Gong practitioners by the Chinese Communist regime would be brought to an end soon.

The Chief Financer for this evening entertainment, Mr. Jacky Bernard, is a fan of Chinese Culture. After seeing the Falun Gong exercise demonstration and traditional Chinese dances by Falun Gong practitioners, he was very happy. He said, "Your language, the way of living and values are all important to us. China is a very beautiful country. We are very lucky to have you here tonight and see your beautiful performance. I hope you will come again. I thank all organizers for the party. The performances are extremely beautiful. Thank you for your efforts." 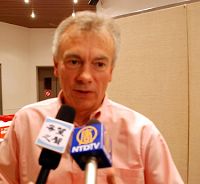 The activity organizer said that because Beijing is to host the Olympic Games, thus the evening is named as "A Night of China". It is also to raise awareness about what is happening in China. Regarding human rights in China, Mr. Bernard said, "I don't think the Olympic Games in China are going to improve China's human rights situation. It is very regrettable." 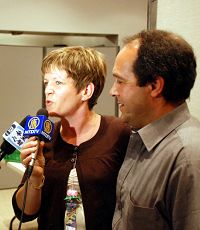 Ms. Veronique Dantec liked the paper lotus flowers folded by Falun Gong practitioners. She said, "I like this lotus flower very much. You see, I have been wearing it all the time. I think it represents your nation."

Regarding the Chinese Communist regime's persecution and killing of Falun Gong practitioners, Ms. Dantec said, "I cannot accept the persecution of Falun Gong. They have the right to practice their exercises and seek their physical and spiritual well-being. People have rights to live the way they choose. As French, we also should do something to end this persecution."

The vice president of the Beuachamp football club Mr. Da Silva said, "I liked all of the performances, dancing, music and color. They help us to experience traditional Chinese culture."