(Clearwisdom.net) The Washington DC branch of The Epoch Times newspaper held a press conference about the implications of CCP behind-the-scenes involvement in the recent attacks in Flushing on the afternoon of June 9, 2008 in the Rayburn House Office Building in Washington DC.

Melbourne, Australia: Rally in Support of Quitting the CCP (Photos)

(Clearwisdom.net) On June 8, 2008, a rally was held in the heart of Melbourne, Australia in support of the 38 million courageous people who have quit the CCP. 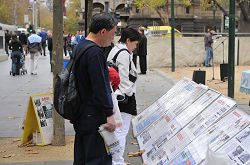 (Clearwisdom.net) The documentary "Beyond the Red Wall" was broadcast on May 29-30 on national television in Sweden, and repeated twice on June 1, on Channel 8.

The film addresses the Chinese government's unlawful persecution of Falun Gong and the horrible facts regarding the Chinese Communist Party (CCP) harvesting organs from living Falun Gong practitioners and selling them to foreign tourists for profit.