On April 25-26, 2008, the Penghu Fireworks and Symphony Festival and the Lake West County Children's Sports Meeting were held at Penghu, Taiwan. Volunteers from the Penghu Chapter of the Coalition to Investigate the Persecution of Falun Gong in China (CIPFG) set up an exhibition to collect signatures to protest the Chinese Communist Party (CCP) persecution of Falun Gong. There are not that many activities on Penghu Island, so the volunteers took advantage of the festival and event to ask people to speak out against the persecution. 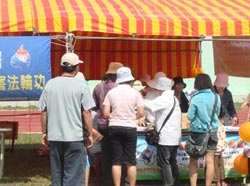 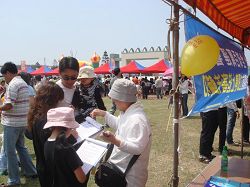 Founded in 2006, the CIPFG seeks to expose to the world the CCP's blatant disregard for the United Nations Charter, the Universal Declaration of Human Rights, and other international covenants on human rights, even as it highlights how the CCP is damaging the Olympic spirit, a tradition that respects human rights. The CCP deprives the Chinese people of their basic human rights, including freedom of speech, freedom of press, and freedom of religion. The situation is worsening as the CCP prepares for the 2008 Olympic Games.

The CIPFG is appealing to international society to pay close attention to the persecution of tens of millions of Falun Gong practitioners in China. The CIPFG is asking everyone with a conscience to loudly say "No" to the CCP's inhumane persecution and to voice the opinion that the "Olympics and Crimes Against Humanity Cannot Coexist in China." The CCP must stop persecuting Falun Gong before the Olympic Games.

Though the music was very loud during the festival, the Falun Gong practitioners continued to tell people about the evil nature of the CCP and to ask people to sign the anti-persecution appeal. Many of the kind citizens of Penghu signed the appeal. Eighteen hundred signatures, including 43 from local officials, were collected in only two days.

“Applause for DPA's Impressive and Engaging Bearing in Vancouver”