May 13th, World Falun Dafa Day, is an extraordinary day. On this day in 1992, Falun Dafa was introduced to the public in China. It has since spread to more than 80 countries. May 13, 2008, marks the ninth World Falun Dafa Day. Practitioners in Los Angeles celebrated the special day and Master's birthday at Santa Monica Beach on May 11, 2008. 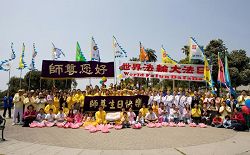 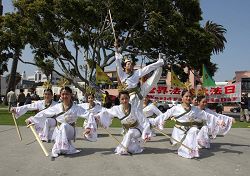 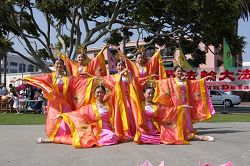 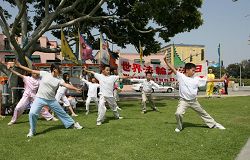 It was a nice day in Los Angeles. The celebration started at 1:30 p.m. with a poem by Falun Gong practitioners. The performances continued with a resonant drum performance. Practitioners of different ages and ethnic backgrounds demonstrated the five sets of exercises. A host introduced the exercises and told how Falun Gong has spread to more than 80 countries. Many tourists stopped to watch the celebration, and some copied the exercise movements. 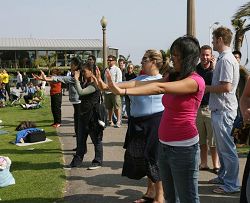 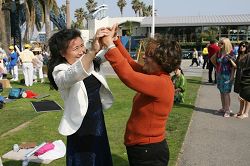 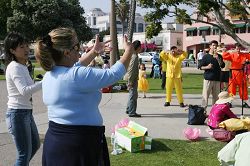 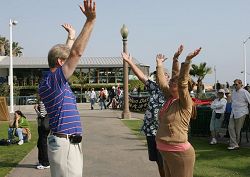 Practitioner Albert Roman introduced Falun Dafa, including its introduction in 1992, the five sets of exercises and the principle of "Truthfulness-Compassion-Tolerance." 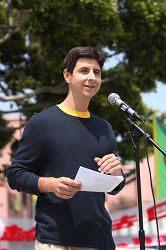 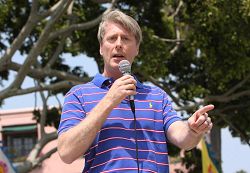 Another practitioner, Dana, shared his personal experience of practicing Falun Gong. He was previously a heavy drinker and had several diseases. But his pursuit for meaning in life made him keep looking. When his landlord introduced Falun Gong to him, he studied it right away. After two months, all his diseases were cured, and he quit drinking. He felt very peaceful and began considering others before himself. 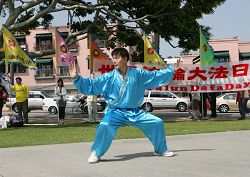 Martial arts is a wonderful part of Chinese culture. Li Youfu, who won a national martial arts championship in China in 1982, firmly believes that Falun Dafa is the great law of the universe that he has been looking for. He told the reporter that Falun Dafa was very precious and truly offered salvation to peoples' spirits. "More and more are learning the benefits of Falun Dafa."

Upon mentioning Master Li, quiet Mr. Li Youfu looked touched. He said, "I can feel Master has endured hardships beyond all imagination. Master wholeheartedly wants to save more people. I respect Master very much! That's why so many practitioners celebrate World Falun Dafa Day today. The CCP persecution is doomed. We have no interest in its power, but we have to expose its evil nature so that people can distinguish the good from the evil." He said many CCP insiders personally said Falun Dafa was great but dared not to declare it due to fear and pressure.

Children from the Minghui School prepared a variety of performances and showed their skills. Dozens of practitioners sang songs praising Master for enduring hardships to save the sentient beings.