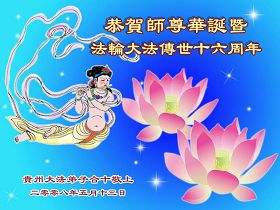 Practitioners from the following counties, cities and provinces all respectfully wish revered Master a Happy Birthday, and celebrate the 9th World Falun Dafa Day and the 16th Falun Dafa's public introduction. Some practitioners also stated in their greetings that they will do the three things well and save predestined sentient beings, fulfill their prehistoric vows and live up to revered Master's compassionate and arduous salvation.