Finnish MP: Artists Should Have the Courage to Present the Truth (Photo)

(Clearwisdom.net) On March 30, 2008, Divine Performing Arts Chinese Spectacular premiered at the Tampere Hall in Finland. Finnish MP Pertti Virtanen was in the audience, and later said emotionally, "Every artist should do something for the truth, should have the courage to present it, it is an artist's responsibility to present to the world's people what is happening in China." 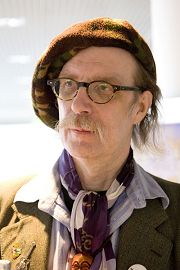 Finnish MP Pertti Virtanen is a member of Tampere City Council, and also a composer, poet, and an artist. He said he liked the music in the East, such as the rhythm in China, Mongolia, Korea and Japan, they can make one feel inner peace and touch one's heart.

MP Virtanen liked the "Mongolian Bowl Dance" because it expressed the inner peace. He said, "As I saw the ladies doing this cup dance I felt stillness within the movements, and sacredness...such an attitude is helpful to anybody, through cultivation, one achieves a peaceful mind.

This versatile MP thought "This Spectacular is a living thing. It's living today, waking up, and yet it's very old. That's why there is such power and originality to it." He then added that he enjoyed the soprano solo by Min Jiang. He said that her singing was very powerful. Such a power of art can eliminate all evil and rotten things.

MP Virtanen said he is a psychologist, if one tells lies, oppresses and restricts others, one's heart won't be healthy. Therefore, he felt indignant at the persecution of Falun Gong in China portrayed in the performance, he said, "Every artist should do something for the truth, should have the courage to display what is happening in China to the world's people. It is the responsibility of an artist."