(Clearwisdom.net) March 24th, 2008, was the last day of the long Easter weekend. Practitioners went to St. Martin's Square in central London once again to collect signatures supporting an end to the persecution of Falun Gong in China. Practitioners hoped to let the British public know that the Chinese Communist Party (CCP) recently stepped up its persecution of Falun Gong in the run-up to the Olympics. 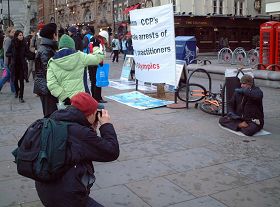 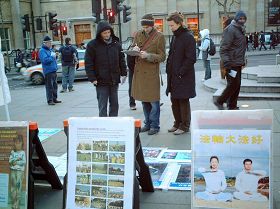 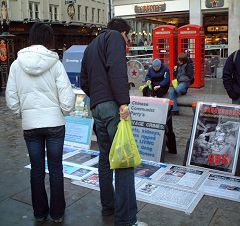 As usual, practitioners displayed banners and information boards. Some demonstrated the Falun Gong exercises while others distributed leaflets and collected signatures from passer-bys. The posters and banner displayed on the side of the road attracted many to stop and inquire. Quite a few took the leaflets also. One after another, people signed the petition form to condemn the CCP atrocities and support stopping the persecution.

An English lady, Joyce, told a practitioner that she understood why the CCP persecuted Falun Gong. The CCP have a fear that the people would develop their own "free thinking."

A Brazilian tourist, Ms. Dazi, came to know Falun Gong for the first time. She had not known such a persecution was happening. After reading the posters carefully, she signed to support the practitioners.

A few young people promoting "Free Hugs" in the streets also signed the petition form. They said aloud, "We support you!"

A couple from Spain wanted to learn the truth very much but did not know any English. A practitioner from Argentina happened to be on site to explain details of the persecution in China. They expressed deep sympathy for the suffering practitioners in China.

Seeing so many people had learned the truth and made a just choice, practitioners who stood in the wind and rain for five or six hours were very pleased. They found that more and more people from all walks of life are paying attention to the persecution of Falun Gong.

“Finnish MP: Artists Should Have the Courage to Present the Truth (Photo)”