On April 15, 2008, Divine Performing Arts performed its first Chinese Spectacular show at the Alliance Theatre in Milan, Italy, and won enthusiastic applause from the audience.

Among the audience were four Chinese. Ms. Cui and Mr. Chen were from Taiwan, and Ms. Sun and Ms. Wu were from Beijing and Shanghai respectively. At the end of the first half of the show, they said that the performance was wonderful. They said the dancing was terrific and beautiful. They were particularly impressed by the program, "Nymphs of the Sea."

Mr. Chen had done some study in traditional Chinese culture, and spoke highly of the Chinese Spectacular. He said that it was his first time seeing such a diverse introduction to Chinese classical culture, and he was delighted and proud. "The Divine Performing Arts company did a very meaningful job of spreading the essence of Chinese culture to the world. Well done."

Mr. Chen continued, "Dance is the essential part of Chinese culture--the wonderful part in Chinese calligraphy, for example, Wang Xizhi's works were so good. [Calligraphy] was inspired from Chinese dance, it is an important component of Chinese aesthetics."

These four Chinese are all of the Catholic faith. Speaking about the programs that concerned belief, they agreed that it is important that people believe in compassion.

Ms. Du was from the China Central Academy of Fine Arts and recently arrived in Milan. She is studying in the field of art. After seeing the show, she said, "The stage design was quite good, the costumes were exquisite. The artistry is recommendable."

She continued by saying that the choreography of the entire performance was excellent. She was quite familiar with the cultural presentation, and was appreciative of the values expressed in the performance.

A young Chinese man who is studying architecture in Milan and recently came from China said that his favorite programs were the drum acts and the performance depicting Yue Fei ("The Loyalty of Yue Fei"). He said he would recommend that his classmates and friends go see the Chinese Spectacular the following day. 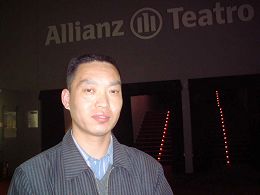 Mr. Wang said it was pity that his family members were unable to see such a wonderful Chinese cultural show

He said, "As Divine Performing Arts is unable to perform at the moment in China, it's a pity that my family members are unable to see such a wonderful Chinese cultural show. Without freedom, it is meaningless if one eats and dresses well."

In addition, Mr. Wang believed that Divine Performing Arts will help more people pay attention to issues of freedom of belief and other basic rights.