Golden Horse Award Winners: We Felt the Power of Compassion in the Show (Photo)

The superb performance by Divine Performing Arts (DPA) has created a sensation on its world tour. Director Yang Li-chou, winner of the 43rd Golden Horse Award for his documentary "My Football Summer", and his wife Michelle Chu, another Golden Horse Award winner, attended the Chinese Spectacular at the Taipei International Convention Center 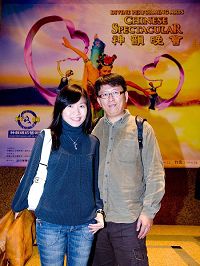 Mr. Yang said, "The auditory and visual experience is secondary. The strongest feeling is the spiritual part. I felt blessed when watching the show and hearing the music. It is hard to describe, but I can feel it. After seeing the dances and hearing the Erhu music, I felt the pride of my heritage."

Mr. Yang continued, "We work on documentaries that aim to spread beauty and compassion through film and have a positive influence that way. Dance, music, painting and art all try to show the good side of the world and have a positive influence. As many things have been forgotten, the power of compassion remains as precious as ever." He was beaming with enthusiasm as he spoke of the show. "Today's show made us feel the power of compassion through dance and music." Like her husband, Michelle Chu has won numerous awards for her work in making documentaries. She said with smile, "I am so glad that I came to see the show! Our friends told us to watch it with peaceful hearts, so we came a half hour early and sat down to wait for it. It is very peaceful, very different from the shows we saw overseas. Some shows only aim to dazzle the audience. Today's show was not only exciting and beautiful, but it was also uplifting."