(Clearwisdom.net) Falun Gong practitioners and their supporters rallied in front of the United Nations Headquarters in New York at noon on March 18, 2008. A similar rally was held the night before in front of the Chinese Consulate. They protested the recent escalation in the persecution of Falun Gong in the run-up to the Olympics. 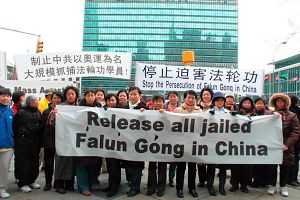 Mr. Wang Zhiyuan, representative of the World Organization to Investigate the Persecution of Falun Gong (WOIPFG), Dr. Wang Wenyi, representative for the Overseas Chinese Physicians Human Rights Committee, Dr. Li Dong, renowned political commentator studying for his doctoral degree in politics at Columbia University, Ms. Song Yun, coordinator of the East-US Falun Dafa Association, Liu Jinan, representative of the Global Service Center for Quitting the CCP, China Democratic Party spokesperson Ms. Ni Yuxian and others spoke at the rally. They pointed out that the the Beijing Olympics has become the biggest excuse that the CCP uses to conduct brutal persecution of Falun Gong. They hoped the international community would stop the CCP's new round of persecution.

At least 1878 Falun Gong practitioners have been arrested in 29 provinces, cities and autonomous regions across China since the beginning of this year. Many have been tortured, some even tortured to death.

The peaceful protest attracted representatives of different countries who were passing by at lunchtime, as well as other passersby. Practitioners will deliver an open letter and petition to the UN General Secretary and representatives of different countries, calling on the international community to voice concern about the CCP's brutal persecution of Falun Gong practitioners, and to help stop CCP atrocities.