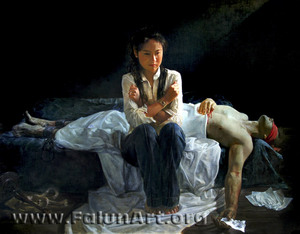 One of the works displayed at the exhibition, titled "Tragedy in China".

Tel Aviv University shut down The Truthfulness-Compassion-Tolerance art exhibit that was held on campus, due to pressure from the Chinese government.

The Truthfulness-Compassion-Tolerance art exhibition contains 25 paintings by 17 world class artists, depicting the Falun Gong spiritual practice and the brutal persecution the adherents of the practice are subjected to by the communist regime in China. Some of the artists are survivors of China's forced labor system and have endured the tortures depicted in the paintings.

According to the original agreement between the organizers of the exhibition and the Tel Aviv University student association, the exhibition was supposed to be held from March 3 until March 14.

According to Yaniv Nitzan, one of the organizers of the exhibition and a student of East Asian studies, the student association claimed that the decision to shut down the art exhibition was made by university management, and that the Chinese Embassy in Israel pressured the university to comply.

"It is important to ask why the Chinese Embassy threatens a university because of an art exhibition," said Nitzan. "I think the answer is clear," he continued. "The exhibition displays paintings of the banned Falun Gong spiritual practice and the torture the practitioners in China are suffering from."

The Tel Aviv University Dean of Students said in an interview with NTDTV that when the Chinese Embassy asked on opening night that the exhibition be shut down, it was explained that Israel supports freedom of speech, and thus the exhibition would continue to run. In spite of this, university management decided to shut down the exhibition one week earlier than planned.

The art exhibition received positive feedback from a lot of student and viewers.

Raz Shpira, a 24-year-old freshmen studying art history, said that artistically speaking, the paintings are very beautiful and are beautifully painted. She added that she learned about the persecution of Falun Gong and would tell all her friends to come and see the exhibit.

Shira from Tel Aviv also came to the exhibit opening and described the exhibit as very powerful. She said that the paintings were very beautiful "and dream-like," while at the same time the theme of the paintings was shocking and hard to take.

Organizers of the exhibition told The Epoch Times that actions by the university authorities, under the Communist regime's threats, are a breach of contract and in violation of the freedom of speech as set by law. The organizers are prepared to file an injunction, though they still hope to correct the situation through dialogue.