(Clearwisdom.net) On March 9, 2008, the Divine Performing Arts (DPA) opened the first show to a full house in the 4,000-seat Huisun Auditorium in the National Chung Hsing University in Taichung City, Taiwan. 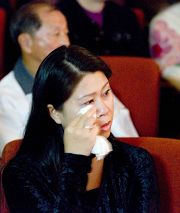 Audience member moved to tears by the performance 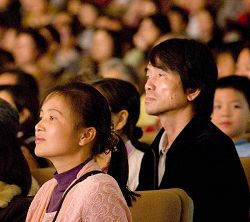 Some people came all the way from outside of the mid-Taiwan area. After seeing the show in their areas, some inquired about the March 9th show in Taichung. People from different walks of life praised the show.

The two-hour show won applause from the audience throughout the show. "The Power of Awareness" seemed to be particularly uplifting to the audience.

Mr. Huang Chao-Hu is the chairman of the Federation of International Tsai-Mo (color ink painting) Artists (FITMA), and he is also a good friend of renowned artists Lee Chio-Mao, Ju Wei-bai, and poet Yu Kwang-chung. He made it to DPA's first show in Taichung City on a good friend's recommendation. He said in amazement, "This event was so meaningful. The integration of sound, lighting, technology, and artistic presentation was very touching. It carried a certain energy. It really must not have been easy." 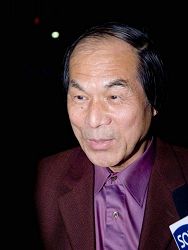 Mr. Huang continued, "When Far Eastern dancers end a performance, that moment is a form of art. In regards to this art, the colors, lighting, and poses are all special. The dancers' poses give us a good reference point."

Mr. Huang also praised the backdrop. "With the integration of technology, men can fly up to the sky, or you can shoot a sun and watch it come down. It was very good. The integration of art, dance, and music was powerful."

Mr. Huang hoped that artists, music lovers, and dancers in the Taichung area could come see the show. He said he would spread the word because he believed this event was especially meaningful.

Ms. Bai Huiyi is the chairperson of the Promoter Association of Taiwan Arts Avenue. After watching the show, she said, "The entire show was great. The stage and costume designs were very good. Every performance was good. Overall, the scenes were great as well." Ms. Bai is an artist who paints with glue. She thought the show allowed children to personally experience history, and each piece was more convincing than simply orally passing down traditional culture.

She said the performance had a distinctive rhythm, and as the performers danced to the music, it was as if there was an interaction of energy and bearing. "It really felt very good. The costumes, backgrounds, and sound effects meticulously blended together and gave you a realistic experience. It was an amazingly beautiful show."

Mr. Wu Hongyu, formerly the Administrative Director of Changhua County String Orchestra and currently the counseling director in the Hsin-Min Elementary School in Changhua County, has studied Chinese culture in-depth. He said, "Even without the use of dialog, the inner content of each performance can be understood by the audience."

Mr. Wu was most impressed by "Descent of the Celestial Kings". He believed the dance "Water Sleeves" perfectly manifested celebrating good times with song and dance, and "The Lady of the Moon" presented a familiar historical story on stage excellently.

Wu Hongyu said, "The backdrops blended well with the stage. The backdrops' presentation was perfect. In the past, traditional stage performances needed to constantly change scenes, and in doing so, they wasted a lot of time. The show was able to incorporate high tech elements perfectly into the performance; I was very surprised."

He further emphasized that the show was of the "greatest caliber in Taiwan." In particular, he thought it was incredible when he learned that the show's tickets were sold out. Based on his personal experience, he knew it was rare for any performance in National Chung Hsing University's Huisun Auditorium to completely sell out of tickets.

As a veteran teacher, Wu Hongyu said the show combined historical culture and performing arts perfectly, and the future "arts and culture curriculum" in elementary school could use the show as an important reference.

Stage Director: The Performance Was Professional; The Drum Music Was Beautiful

Ms. Huang Meiya, a stage director for the Changhua City Kids Orchestra, said the performance was very professional. Her favorite was "Drummers of the Tang Court." She said with enthusiasm, "The drum music was so beautiful. The beats of the drums were almost identical, and the intensity of everyone's drumbeats was so well controlled."

Ms. Su Meihui, who used to play the sheng in the Keelung City Chinese Orchestra and Taipei's Chinese Citizen Orchestra, is now an instructor/conductor for the Dongshih Junior High School Chinese Orchestra in Taichung County. She said, "I think the show was very good. It combined music, dance and backdrop design. It was great; it had cultural flavor. I was especially impressed by the soprano Huang Pi-ju's two songs, for the melodies and her singing style were very moving." 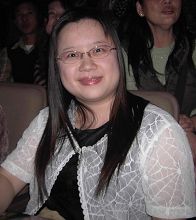 Musician: The Background Music Integrates with the Stories

Ms. Liu Yujing is in the music business. She said a friend recommended the show and told her to listen to the background music. She was pleased to have such an opportunity. She analyzed the music based on her professional experience. "The background music was mostly created by Chinese composers, and it blended well with the stories and made the overall performance more attractive."

Many pieces originated from Chinese historical stories, myths, and legends: "The Loyalty of Yue Fei," "The Lady of the Moon," and so on. Ms. Liu said that they were familiar and famous stories that she has grown up with. As she grew older and through her experiences in society, she had gradually forgotten them. She said, "It was as if an old memory was being awakened, and then I was deeply moved by the stories." She also emphasized that the background music of "The Lady of the Moon" had very distinctive and clear-cut segments which closely integrated with the story. "It is remarkable."

When talking about the dance "The Risen Lotus Flower," Ms. Liu, who used to study in the U.S., said, "When I was in the U.S., I constantly came across information about Falun Gong being persecuted in China. After seeing the DPA's interpretation in the form of dance, I have a deeper understanding."

“Scottish Musician in Taiwan: I Want to Sing Songs from the Spectacular (Part 2) (Photo)”