Scottish Musician in Taiwan: I Want to Sing Songs from the Spectacular (Photo)

(Clearwisdom.net) Robin Dale is a popular musician in Taiwan. People call him the "Robin Hood of Music." On March 5, 2008, Mr. Dale watched the Divine Performing Arts Chinese Spectacular in Kaohsiung. He said that all the scenes were beautiful, starting with the dance, the music and the songs, all the way to the backdrop and the costumes. He said that the message conveyed throughout all the performances was outstanding. The songs echoed in his heart and he wanted to sing the songs too. 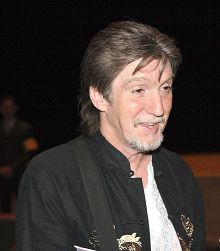 The following are excerpts from an interview with Mr. Dale:

I Thought I Was in Heaven

I grew up in Asia. Therefore, this is not the first time I saw classical Chinese dance. I am in show business and I have seen many world-class performances. I must say that the Divine Performing Arts (DPA) is unique and was an eye-opener from the minute I began watching the show. I can't say which number I liked best, because everything throughout the entire show was beautiful and the backdrops were perfect. What is most amazing is that the costumes, the dance, the music, the songs and the message throughout the program tried to convey a meaning. I liked everything very much. The beautiful celestial maidens and accompanying music made me wonder if I was in heaven!

I am a composer and I sing and play instruments. From a professional point of view, the music in the Chinese Spectacular is very beautiful and moving. The music composition is perfect and ties in with the choreography. The music even matches the backdrop and the colors. It is marvelous! This is why music is important, because it unifies everything harmoniously.

The Way to Happiness

My family has helped the poor and has fought for justice for as long as I can remember. My grandfather and my father were both doctors. They used to see patients for free. I make music to heal people's minds. My songs deliver the same message, and that is to change the society with love. I focus on "love," and also truthfulness and tolerance.

Most people throughout the world are out only for themselves. They want beautiful clothes, good cars, just everything has to be great. It's always about self! My grandfather and father helped others throughout their lives. They are the happiest people. How? If you always live for yourself, you will always pursue things you can't get or achieve, and you will be unhappy.

The artists' smile in the DPA comes from their hearts. These are very happy smiles. I would say, the touching kind. I think they live for others and that's why their smile is so pure and bright. I feel they don't perform just for the sake of performing. They have something in their mind they wish us to know -- the "truth." It's important to always be "zhen" that is, be truthful. It also is important to be shan which means one is always considerate of others. And lastly, it is important to be "ren" because it brings peace to the world. I think I got their message.

This message is simple, yet beautiful. Everyone should be able to understand part or all of the message. This simple message is expressed through dance and body language. The stories showed a deep contrast between good and evil, and guide people in their daily life. The show also tells us to stand up for justice and kindness. I think this message is very beneficial in today's society.

After I began to compose music, I felt that a composer has a responsibility and needs to fulfill it. God gives you this talent, and thus you have a responsibility. Your song can change a person. You can lead the person to walk the right path. But first you must walk the righteous path and not get lost in the artificial world of money. I think my thoughts are very close to the artists'. When I heard the songs during the show, I wanted to sing along.

I'd like to meet the host, the Caucasian who speaks fluent Chinese. I also want to greet the artists backstage and express my sincere thanks for a wonderful and enlightening show.

(Note: After the interview, Dale met with the leader of the DPA, Ms. Li Weina. He sent his best regards to everyone in the group and presented the group with his CD.)

Robin Dale, in his late 50s, is a native of Scotland. He came to Taiwan with his father in his youth. His father was a medical doctor and helped many Taiwanese. He grew up speaking fluent Chinese and ran a business that covered Hong Kong, China, and Taiwan. In the 70s, he worked closely with Zhao Ziyang and communicated with western countries on behalf of Beijing. After the June 4, 1989 massacre, he became an "undesirable" for China and lost his business connections, because he made music CDs protesting the suppression of the students by Beijing. He later settled in Ping-tung County, Taiwan, and became a musician. He continues to make his music and songs to spread his message of love and peace.