On March 5, the second showing of the Divine Performing Arts' Chinese Spectacular took place in the Kaohsiung County Labor Recreation Center. Kaohsiung City Cultural Bureau Director Wang Zhicheng said he thought that the show splendidly displayed the beauty of Chinese culture. He said, "Such a superior, world-class performance is really rare." He hoped that the Divine Performing Arts would continue to share Chinese culture with the whole world. 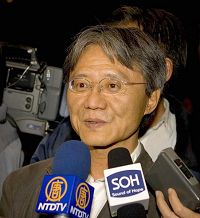 It was the first time he had ever seen such technological stage backdrops, which really broadened his horizons. He thought that the backdrop design could be a model for other arts groups to study and research.

Director Wang was impressed by the format of combining dance with folklore. He said, "The Chinese Spectacular associates dance with folklore. Folklore's vivid stories come to life on a small stage, which reduces the distance between the performers and the audience. It is really remarkable. In these current, democratic times, traditional Chinese culture can be more inclusive and display multiple elements of the culture. The choreography is excellent and admirable."

"The fine Divine Performing Arts show reminds us of our superior and time-honored traditional culture and arts. We should further share them and promote them to the whole world." 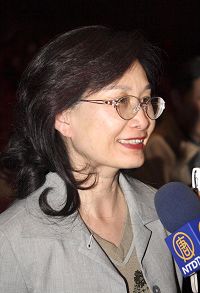 After the show was over, Ms. Xu accepted an interview and said the performance was excellent. She admired the multi-element expressions of Chinese culture. She thought the show was very suitable for international stages.

She said, "I see a unique show. Music and dance harmonize. The ladies are gentle and nimble; the men are very heroic. I think such programs are full of traditional values meaningful to the international community and should be performed internationally."

Ms. Xu also thought that the programs were rich in educational value and suitable for everyone, especially the youth. She said, "From the Spectacular, I felt the essence of our five-thousand-year-old culture. Loyalty and filial piety are illustrated through music and dance, which is good for everyone, especially our next generation, to watch. We should promote more programs like this."