(Clearwisdom.net) The Divine Performing Arts Chinese Spectacular performance has recently opened in Tokyo, Japan. Dignitaries from various fields of Japanese society sent congratulation letters wishing the performance a complete success. They also thanked the Divine Performing Arts for bringing the traditional Chinese culture of pure compassion and pure beauty to the people of Japan. Below are some greetings and congratulatory letters.

(Clearwisdom.net) The Divine Performing Arts Touring Company's premier at Frankfurt's Jahrhunderthalle (Century Hall) was a great success. The second crowd of people were seated at 2:00 p.m. on February 17, 2008. The audience responded with seemingly endless, excited applause during the entire performance. The dances that received the most enthusiastic applause were " Descent of the Celestial Kings," "Nymphs of the Sea," "Mongolian Bowl Dance," "Drummers of the Tang Court," "The Power of Awareness," and "Victory Drums." The witty dialog between the host and hostess brought out smiles of understanding from the audience from time to time.

Frankfurt, Germany: We Will Come Again Next Year (Photo)

(Clearwisdom.net) On February 17, Mr. Nobert Meister and his family attended the Chinese Spectacular at Jahrhunderthalle Theatre in Frankfurt. 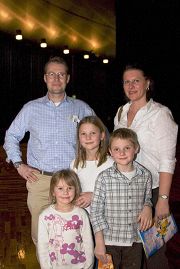 During the intermission, the reporter interviewed Mr. Meister and his family. Mr. Meister said he liked the dances, especially the drum dances, and his wife said she liked the arrangement of the dances--the soft ones with fairy ladies following the energetic ones with drums.