A month before the Divine Performing Arts Chinese Spectacular is to be staged in Paris (February 29, March 1-2), the largest magazine in France, Femme Actuelle, with a circulation of over 1 million copies per week, devoted a full page and a half to the Spectacular.

Emphasizing the high artistic quality of the show, the magazine complimented the "astounding" beauty of the choreography, the hand-made costumes and shimmering scenery "worthy of the biggest spectaculars."

Admiring the rich historical content of Divine Performing Arts show, the reporter explained that the Chinese Spectacular depicts a "forgotten" China: "Not Mao Zedong's China, not the China of the Tiananmen tragic events in 1989," and brings back to life the "most refined periods of history that the planet has ever gone through: the prosperous Tang and Qing dynasties." 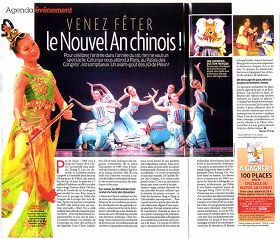 According to the report, "Behind the beauty," the Divine Performing Arts show is "imbued with peace and tolerance" and expresses "values that are all too often trampled in China."