Fa Teaching Given in Manhattan

There is always a good turnout for the New York Fa conferences since you all know that Master spends a lot of time in the New York area. Each Dafa disciple is trying his utmost to do what he should do on the path of validating the Fa, and since what you are doing at present is closely linked to your cultivation, you are in fact cultivating this way. The form that your cultivation takes has one cultivate in ordinary human society, and people in different social classes or different professions can all cultivate; and as you reside in different societies and make use of the different professions you are in to validate the Fa and save sentient beings in every corner of the world, you are utilizing this present form of society to cultivate.

(Clearwisdom.net) A total of fifteen performances of Chinese New Year Splendor were given at Radio City Music Hall during the Chiense New Year holiday season, much to the delight of a vast array of attendees.

(Clearwisdom.net) The last two shows of the Chinese New Year Splendor, presented by the Divine Performing Arts, played to full houses at Radio City Music Hall on Saturday, February 9, 2008. Some in the audience pointed out that they decided to come to the show after they read a somewhat critical article in the New York Times. 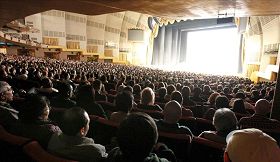