On February 2nd, 2008, an International Truthfulness Compassion Forbearance Art Exhibition opened in an exhibition hall of a private gallery in Kpachorpck City in the Chenpb Region, Siberia. Before that, the exhibition was held at the national Cultural Historical Museum for two weeks and attracted a lot of attention from local media and the general public. The artworks in the exhibition were created by artists who practice Falun Gong. 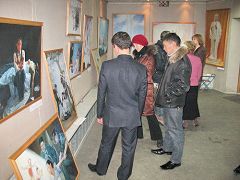 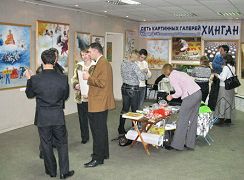 An exhibition interpreter at the national Cultural Historical Museum, said, "Though the exhibition hall is not very big, visitors can feel much at home as it has a very cozy atmosphere." The exhibition will last until February 15th, 2008, and after that, it will be held at the two exhibition halls of a Chenbp Gallery.

“Switzerland: An Overview of the Activities of Swiss Practitioners, Part 3 (Photos)”