(Clearwisdom.net) On December 20, the Divine Performing Arts (DPA) presented its final show in Atlanta at the Cobb Energy Performing Arts Center. The audience gave the performers a warm welcome and high praise. 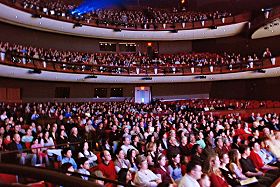 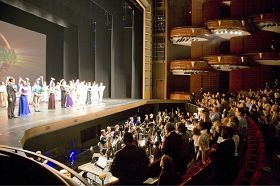 Mr. and Mrs. Clark drove two hours to see the show. Mr. Clark is a musician. He said that the music in the DPA show is excellent. Mrs. Clark said the piano and singing made a very deep impression on her. "Truthfulness-Compassion-Forbearance is the obvious theme," she said. "Life is meaningful if one follows that principle. Compared to other shows, this one is unique. The dancers are excellent and the costumes are spectacular. I was astonished by the energy and creativeness of the show."

Cristy, a professional dancer, said: "I expected to see an excellent show, but it was actually better than I expected." She wants to see more. "I have worked as a professional dancer and toured around the world. So, I understand how much hardship the performers have endured. They perfectly demonstrated their spirit on the stage. It was a wonderful experience for me," she said.

The Chinese community in Atlanta also welcomed the show. One Chinese lady, who came to the U.S.A. nine years ago, said that the costumes of the show were spectacular. "I've seen a lot of shows in China, but none of them touched me as deeply as this one--it makes me think about life," she said. Miss Yin is a high school student from China. She came along with her cousin. She liked "Drummers of the Tang Court" very much. "It manifests the traditional Chinese culture to the world," she said: "The background scenes were amazing too, which made me miss my home."

Ms. Zhu is an engineer. She said the show brought her brightness. "It shows the nice side of humanity. It imparts a bright energy," she said.

Nikolas, a businessman from Atlanta, said that he gave very positive evaluations to the show. "The content is illuminating and the messages are positive," he said. He was moved by the program about Falun Gong, in which a father was beaten to death, leaving his little girl alone.

One audience member especially liked the singing by Xu Jianing. She went backstage and asked for an autograph from Xu Jianing. She said the dances were breathtaking too.

Tony, a dentist from Alabama, said the show was high level. "The actors manifest the Chinese culture. I like the programs about Falun Gong, which answered many questions I had," he said. "It is a first-class show. It demonstrated the spirit of Falun Gong." 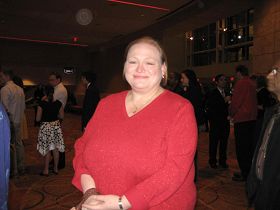 Shelly Hughes is an artist. She has watched the DPA shows three times. "The first time I saw it was in Chicago. I came again here last year. I like the dances and music. I am happy when I see the colorful costumes," she said.

Lynne Simms works at a large communications company. She said: "I am amazed by the dancers' movements. The background scenes were excellent too. I came to the show last year, and I liked it, so I came again. My son, who lives in California, told me about this show. He said it is wonderful and once you watch it, you will come back again and again. The show is unique, especially the singing, which contained strong messages. I will come again next year. It has become my tradition." 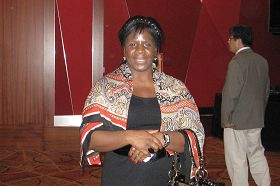 As to the persecution of Falun Gong, Lynne said the evil people should be stopped. "Truthfulness-Compassion-Forbearance is precious. We should not allow anybody to destroy it. If the dictators try to persecute their people, they will crash down someday," she said.

The Divine Performing Arts International Team will hold two shows in Houston next on December 22 and 23.