Taiwan: Waist Drum Team Tells the Facts of the Persecution to Tourists from China (Photos)

(Clearwisdom.net) On November 22 and 23, members of the Falun Dafa waist drum team went to Alishan (Mount Ali), a tourist destination in southern Taiwan, to advocate the beauty of Falun Dafa and clarify the facts about the persecution of Falun Dafa in China to tourists from China. After the tourists understood the truth about the persecution, they expressed their desire to quit the Chinese Communist Party (CCP) and its affiliated associations. A practitioner that went to Alishan said, "On November 22, 57 Chinese tourists quit the CCP. The next day, there were 76 of them. It seems that people from China understand the beauty of Falun Dafa and recognize the evil nature of the CCP." 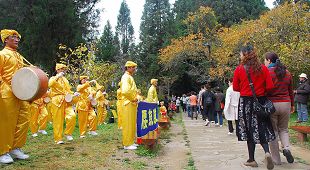 The waist drum team made up of Taiwan practitioners shared the beauty of Falun Dafa. 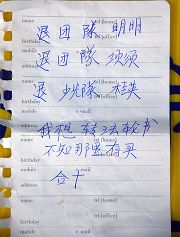 Tourists from China wrote a note saying they wanted to quit the CCP and its affiliated organizations and slipped it into a practitioner's hand. 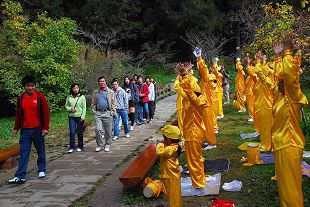 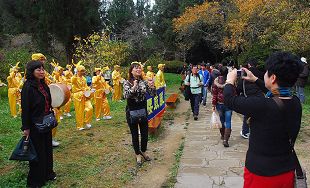 A tourist from China had a picture taken with the waist drum team in the background.

More than 130 Chinese Tourists Quit the CCP in Two Days

On November 22, the team performed as they entered Alishan Park. Many tourists and store owners applauded to show their support. The owner of a restaurant in front of Tian Temple said, "The performance was great and their movements are in sync. It was pretty. I haven't seen it before in Alishan."

A member of the drum team said that he was here four years ago drumming by himself, "Tourists from China were very curious. I told them that the waist drum came from Shaanxi, China, and is a dance performed when there is a celebration. Some tourists wanted to play it and I let them. Other practitioners took the opportunity to tell them about the persecution in China. It was very effective."

Another practitioner said, "Tourists from China were often attracted to the drum performance. Many of them just stood in front of the team wanting to learn more about the drums. A man said he felt cordial when he saw the drums because he learned it as a child. He was from Zhejiang Province and wanted a practitioner to help him quit the CCP using an alias."

Another practitioner said that, based on his experience, whoever smiled when he/she saw the quitting the CCP display boards, this person would definitely agree to quit the CCP. "Almost every tourist from China I came across quit the CCP."

Practitioners who went to Alishan to clarify the truth of Falun Dafa have the feeling that now many Chinese people have the courage to accept Falun Dafa information in public. "They are different now. Some of them just helped themselves to the free copies of the Nine Commentaries. They didn't hesitate or worry that those next to them might see them accepting materials from Falun Gong. When we told them to quit the CCP to stay safe, five or six of them came forward quickly."

When the drum team returned the next day, they marched and performed from the Sacred Tree to the Older Sister Pond, the Mulan Garden, the Three-Generation Tree, and back to the Sacred Tree. When they marched and performed, a woman from China walked toward a member of the team and said gently, "I wish you good health." That team member was very touched and told her, "Please see through the CCP's evil nature and quit the CCP to stay safe."