San Francisco, US: Celebrating the Fourth Anniversary of the Publication of Nine Commentaries on the Communist Party (Photos)

On November 19, 2004, the book Nine Commentaries on the Communist Party was published by the Epoch Times. The commentaries soon inspired a global movement of quitting the Chinese Communist Party (CCP) and its affiliated organizations. To date, more than 45 million Chinese people have quit the CCP. On November 15, 2008, San Francisco Falun Gong practitioners and people from all circles rallied at the Garden Corner in Chinatown to urge more people to quit the party. 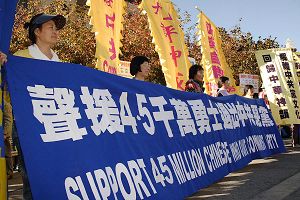 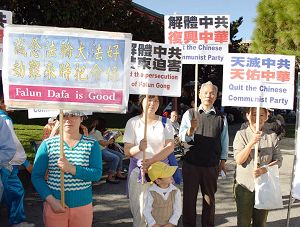 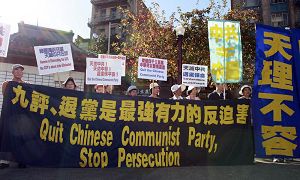 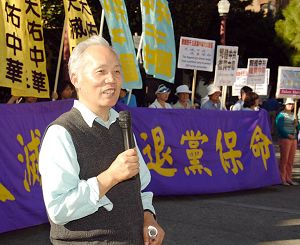 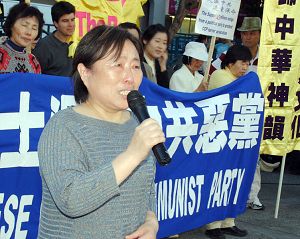 Ms. Chen recounts the brutal persecution she experienced in China 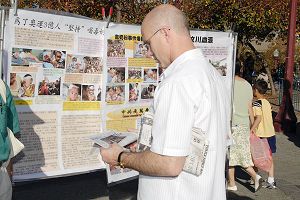 Steve of Seattle reads a handout at the rally

Falun Gong practitioner Ms. Chen just came to the US from Qingdao, Shandong Province. When she found a practice site in the San Francisco Bay area, she cried. At the rally, she spoke about the brutal persecution: "In Mainland China, Falun Gong practitioners are not only being deprived of their right to practice but also being closely monitored by the authorities. In Qingdao, many practitioners disappeared since the persecuted started in July 1999 and no one knows their whereabouts. Since we learned that the CCP has been systematically harvesting organs from living Falun Gong practitioners, I have been so concerned for their safety."

Dr. Youzhi Ma spoke at the rally on the behalf of the Northern California Quitting the CCP Service Center. Ma said that the Nine Commentaries systematically reveals the nature of the CCP. While some people might think the party has become better over the past several decades, Ma said that the fact that the Party only cares about its own interests has never changed. "The recent tainted milk scandal once again reminds us that the CCP only cares about own interests: To show a polished appearance during the Olympics, it chose to cover up the findings of tainted milk. Consequently, everyday Chinese people drank tainted milk for more than 40 extra days, putting the lives of tens of millions children at risk. Over this period, several deaths of children were reported."

Ma said that there are still many Falun Gong practitioners in China who are being brutally persecuted and many of them are facing organ harvesting. He said: "The CCP is an evil party which will never correct itself. Its nature has not changed and it will not change. We should not hold any hope in the CCP. As long as it exists, the havoc of the Chinese people will continue. While it is doomed to be disintegrated, this day will come sooner if all Chinese people open their hearts to learn about the truth."

Mr. Ren is a retired professor at a top Chinese university. At the rally, he reviewed how the CCP systematically destroyed traditional Chinese culture and discussed several retribution cases. He said that his elementary school principal led a group people to destroy a Buddha statue in a temple. This principle personally tied a rope around the neck of the statue so that they could drag the statue down. On the next day, the principal died. One day later, the son of another person who was also involved fell into a well. Though the CCP forces people not to believe in retribution, it has happened very often during the persecution of Falun Gong. "In 2004, Ren Changxia, a high-ranking public security officer, died in a car accident, and she was just 40-years-old. Ren was active in the persecution of Falun Gong."

Professor Ren said, "The CCP's atrocities have offended both Heaven and the people and thus its fate is sealed. For this very reason, people should quit the CCP and its affiliated organizations as soon as possible."

At the rally site, Falun Gong practitioners set up a photo display which attracted many tourists. Steve of Seattle was on a business trip and he was reading a copy of "Falun Gong Today." When he learned that Falun Gong practitioner and musician Yu Zhou was persecuted to death while in custody, he said: "This is terrible. I completely support you. We should pressure the Chinese Communist regime to improve its human rights record."