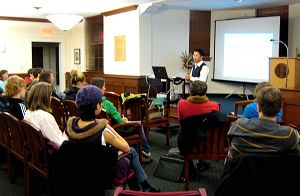 Mr. Huang shared his personal experience in the persecution. For practicing Falun Gong, he was imprisoned a number of times for a total of five years. When he was detained in the Zhuhai Detention Center and then Zhuhai Prison, he was forced to do slave labor producing sweaters and holiday decoration lights, and cracking pistachio nuts. "I have seen many cheap products in US stores which are identical to what I was making. These products are all labeled 'Made in China.'"

Universities have not been a safe haven during the persecution. Mr. Huang said, "To date, more than 10 practitioners from my school--Tsinghua University-- are still being detained and tortured in Communist concentration camps."

Mr. Huang then discussed how Falun Gong practitioners in China and overseas have been resisting the unprecedented brutal persecution with non-violent means, such as going to the central government and then Tiananmen Square to appeal, filing lawsuits against former Communist leader Jiang Zemin, and clarifying the truth to people worldwide. Falun Gong practitioners have created a miracle in human history with their signature peace and perseverance.

Mr. Huang urged more kind-hearted people to step forward to end this persecution, and he concluded his speech by quoting Dr. Martin L. King: Injustice anywhere is a threat to justice everywhere.

After the speech, Professor Dewell expressed his appreciation to Mr. Huang in person. This was the first time for many American students to learn about the persecution of Falun Gong and the human rights situation in China. They were shocked and many signed a petition to condemn the persecution. Some students also expressed interest in learning the Falun Gong exercises. Almost every faculty member and student acquired a copy of a Falun Gong brochure, the Nine Commentaries on the Communist Party DVD, or a copy of the English Epoch Times which documented the organ harvesting atrocities of the CCP.

“San Francisco, US: Celebrating the Fourth Anniversary of the Publication of Nine Commentaries on the Communist Party (Photos)”