(Clearwisdom.net) On September 26, 2008, Falun Gong practitioner Mr. Hung Tenghsiang, Huideng High School principal in Yilan County, Taiwan, won the 22nd "Hung Dao" Award issued by the Private Education Association in Taiwan. This award is the highest a private school teacher in Taiwan can be honored with. 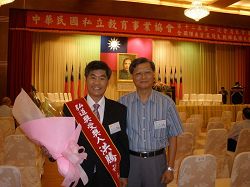 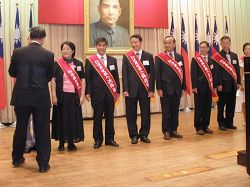 Mr. Hung has won many awards

In 1996 he, in cooperation with others, founded Huideng High School in Yilan County and has been its principal since. The school initially had only 300 students, and now the number is 2,000. The rate of increase is the highest percentage of all private and public schools in Taiwan. Principal Hung emphasizes moral education and foreign languages. He is also responsible for several innovations in Taiwan's education history, such as helped to create the "Private School Law" and was instrumental in the development of private schools in Taiwan. He credited his coworkers and his Falun Gong practice with his high achievements. 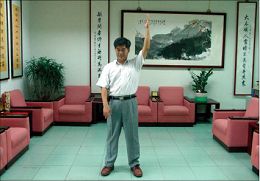 Mr. Hung said, "Since I started practicing Falun Gong, my philosophy of education has changed. I got rid of my worries about everything. I applied Falun Dafa's principles of Truthfulness-Compassion-Forbearance to education and got very good results. Our students won first places in the country-wide basic science competitions two years in a row."

Mr. Hung also pays special attention to borderline students who were almost kicked out of school. Instead of getting rid of them, he chooses to educate and discipline them. His love for these students won him respect from parents, other teachers and students.

Mr. Hung often talks about Falun Gong and exposes the persecution to officials and co-workers in the education community. He also often goes to seaports to clarify the truth to fishermen from China, relating his own practice experiences. 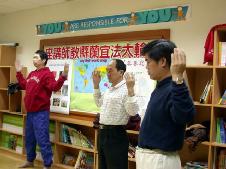 During the December 20, 2006 Yilan County Educational Congress, Mr. Hung proposed a resolution to condemn the Chinese Communist Party's (CCP) harvesting organs from living Falun Gong practitioners and urged international human rights organizations and the WHO to investigate the cases. The resolution was passed. Members of the Yilan County Educational Congress joined the Coalition to Investigate the Persecution of Falun Gong (CIPFG).

With Mr. Hung and other Falun Gong practitioners' efforts, on May 7, 2008, the Yilan County Council passed the resolution to hold the HRTR. All the Council members signed their names to a petition against the persecution. On June 3, 2008, Yilan County mayor Mr. Lu Guohua and Mr. Hung led the HRTR and ran with the attendees. 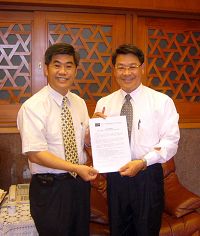 On April 21, 2008, Mr. Hung and other Falun Gong practitioners met with Mayor Lu Guohua. Practitioners clarified the truth of persecution to Mr. Lu. Mr. Lu and other government officials signed names to a petition to condemn the persecution.

Obeying the principles of Truthfulness-Compassion-Forbearance

Mr. Hung said spanking is not a good way to educate children.

"We stress Ren, and you shouldn't hit or curse at children as you please, including your own children. It is proper for you to discipline them; it's not okay if you don't teach your children. You have to teach them. There are different ways of teaching, but you can't let yourself get too angry in disciplining children--how could that be allowed? You can't get mad when disciplining children, don't actually get mad." (Zhuan Falun Fajie--The Law of Zhuan Falun Explained)

Mr. Hung sees education as a kind of art. You cannot beat children, but you cannot give them up either.

"Children should be disciplined. If you don't discipline them and only indulge them, you will lose virtue. If you don't discipline them you haven't lived up to your responsibilities as parents, so you should discipline them. If your kids don't behave, it's fine if you teach them a good lesson. But you can't treat them like animals--that won't do. This distinction must be clear. When disciplining children, don't lose your temper. It's no good if you really lose your temper, since there is the issue of Ren for you. Ren doesn't mean to forbear after you have lost your temper. Instead it's about not losing your temper in the first place. The child's true life wasn't given by you, and he has his place of origin, so he too is an independent being. Raise them with rationality." (Zhuan Falun Fajie--The Law of Zhuan Falun Explained)

Mr. Hung expressed, "I apply the wisdom I gain from Falun Dafa to education."

He said, "As a Falun Gong practitioner I have the responsibilities to do a good job in education, rescuing people and improving myself. Our school is getting better and better. We have more and more students. Even people from other countries send their children to us. I give the credit for my achievements to Falun Dafa." He also added that he as a practitioner does not pursue recognition and money. He will continue his job and try to do it better and better.

“The Story of My Neighbor Obtaining the Fa”

“How Dafa Practitioners Treated the General Election in Canada”