(Clearwisdom.net) Ms. Chen Yulian and Ms. Fan Yongxian are both 70 years old. They live in Pudong New District in Shanghai. Both of them practice Falun Dafa. They often go shopping together. On the morning of October 22, 2008, Ms. Chen and Ms. Fan went together to a vegetable market but they have not returned home since. They have been held in local detention center ever since.

The daughters of Ms. Chen and Ms. Fan live in Japan. They are, respectively, Shi Ping and Jiang Xiaoyan. Together with their friends, they condemn Chinese Communist Party (CCP) authorities for detaining their mothers in Shanghai. They appealed in front of the Japanese Parliament building in Nagatacho, Tokyo on October 23, calling for Prime Minister Taro Aso, who is going to Beijing to attend the Asia-European Union summit, to help rescue their mothers. 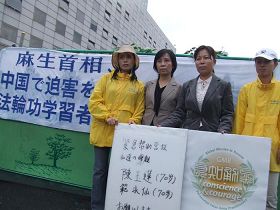 According to Shi Ping, daughter of Ms. Fan Yongxian, her mother and Ms. Chen Yulian went together to buy vegetables at a market that morning. When they explained to a person about Falun Dafa, someone from their residential committee reported them to the police. The police later arrested them and ransacked their homes. Ms. Chen and Ms. Fan were both detained in Zhoujiadu Police Station that night. The police coerced the two older ladies to write "guarantee statements," but they refused to comply. The older ladies are currently held in Pudong New District Detention Center. Shi Ping said that her mother's home was ransacked, a laptop computer and some personal items were confiscated. Her father was so worried that his blood pressure rose. He is ill and left alone at home.

Shi Ping said that her mother had suffered from high blood pressure for several decades, and she also had illnesses such as neurodermatitis, fatty liver, and low white blood cell. She was unable to walk on her right leg because of the osteonecrosis of the femoral head. Her life had been miserable. Early in 1999, Shi Ping's younger sister in Australia introduced her mother to Falun Dafa. After practicing Falun Dafa, her mother could walk, and her other illnesses disappeared without medical treatment. She has not taken any medicine since. This is why her mother has been persistent in explaining the situation of the persecution in China to people around her.

Ms. Jiang Xiaoyan, daughter of Ms. Chen Yulian also lives in Tokyo, Japan. Influenced by the two older ladies, Xiaoyan and Shi Ping became good friends. Ms. Jiang said that it is the second time that her 70-year-old mother has been detained for practicing Falun Dafa. Her mother began practicing Falun Dafa in 1994. Before her practice, she had suffered from several illnesses. Her heart, kidney, gallbladder, lung and stomach had not functioned well. But after her practice of Falun Dafa, all her organs functioned well. In September 2001, she was arrested and detained for over a month. Since then, whenever so-called sensitive days came, the police would come to her mother's home to harass her.

Upon learning that their mothers were arrested, Xiaoyan and Shi Ping are very worried about their safety. The two daughters hope kindhearted people around the world will lend a hand to help their mothers regain freedom, and return to their loved ones.

“Germany: Falun Gong Practitioners Call for an End to the Persecution at the Frankfurt Book Exhibition (Photos)”

“France: Members of the European Parliament call for Eutelsat to Resume NTDTV Broadcasts into China (Photo)”