Obtaining Harmony in My Family (Photo)

(Clearwisdom.net) I am currently in my third year at the national high school of Taipei. I would like to share my cultivation experiences with everyone and let more people know about Falun Dafa and its brilliance.

Seeing the Brilliance of Falun Dafa After Starting Cultivation

During my fourth year in primary school, I often saw people doing exercises in the park that is close to my home. At that time, I was affected by false rumors and I thought that Falun Gong practitioners were a strange group. I always regarded them with a rude stare, and my ignorance caused me to fear them. Whenever I passed by them, I was worried that they would do something to me. But now, I have my own cultivation experiences that I can share. Falun Gong has changed my life and made me a better person. 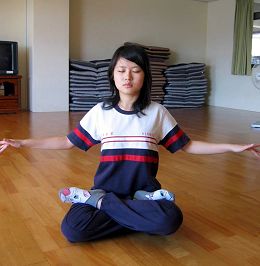 Thinking back, during my second year in high school, I wanted to learn Falun Gong because at that time I was physically weak, and I often had stomach cramps and looked very ill. It was fate that brought me to Falun Dafa.

About a week later, when I was crossing the road on my bike, I was hit by a car. The force threw me back onto a bumpy hill, but I miraculously managed to stay upright despite the force of the collision. The driver was very angry and wanted me to pay for the damage I had caused to her car. At first, I was also angry, as the driver was obviously bullying me due to my small stature. On the way home, I felt very ashamed. What was I thinking when I argued with this person? I am a Falun Dafa practitioner, and my first reaction should have been to ask the driver if she was injured. I realized then that I was unscathed from the accident, and I knew that it was Teacher who protected me. I was very grateful in my heart.

At first, my family relationship was very tense, and we had arguments every day. My father was in the military, and he often acted as if our home was a barracks. He was the leader and no one was allowed to question his authority. I couldn't communicate with him, and because of this, I hated my father. I often wondered why I wasn't born into a happy family, rather than living in a loveless one. I couldn't understand why was my father so mean to me. I was in such mental agony.

I clearly remember a day during my second semester in the first year of high school. My parents were having a fight and I took my mother's side. My father then proceeded to beat me. After that, I left to live with my aunt. I found a job and paid my own living expenses. I often had nightmares about the fight and woke up feeling overwhelmed with pressure. In the second year of high school, due to the travel distance and workload, I had no choice but to move back home. My father was just like a stranger in the house. We never talked, nor did we acknowledge each other's presence.

During the second semester when I started learning Falun Dafa, our relationship gradually improved, and we sometimes talked and even joked around. I had never dreamed that this could happen. Ever since I started cultivation, my family has become much more peaceful, and I can finally concentrate on my studies. I would never have thought things could become like this, but the impossible just happened in front of my eyes.

Things have become much better after I started cultivating, as my life has changed. I am no longer pessimistic, I have stopped complaining all the time, and have become much more forgiving and developed more compassion. For a time I was not able to eat meat, and every time I looked at meat I felt sick, and would really vomit if I put it in my mouth. I have now given up my attachment to meat and can eat whatever is cooked.

Falun Dafa has given me infinite hope. It has made the impossible possible and given me the strength to help others whenever they are in need. I feel joy like never before. A lot of people, due to their limited understanding of Falun Gong, have misconceptions about it. But with my personal experience, I hope to clear up these misconceptions and tell people that Falun Gong is good, and is contributing positively to our society. We follow the principles of Truthfulness-Compassion-Forbearance, and this is what we believe in and raises our xinxing.